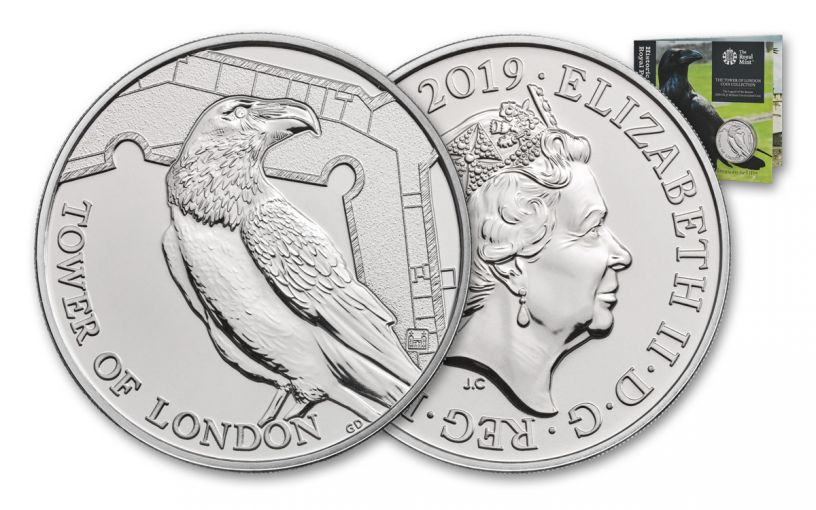 Availability: Out of Stock
This item is currently Out of Stock. Please sign up to be notified if this product becomes available.
Item #
345867
Add to Wish List Add to Wish List Wishlist is for registered customers. Please login or create an account to continue. Add to Compare

The ravens are an enduring symbol of Monarchy, tradition, and history at the Tower of London. And now they’re also the theme of a new coin from Great Britain’s prestigious Royal Mint that pays tribute to the history and lore of one of London’s most famous royal castles. This majestic coin features a Raven perched below one of the Tower’s arches. He is depicted looking over his left shoulder – perhaps keeping an eye on one of the Tower’s famous ghosts? In addition, the Raven is depicted along with one quarter of the outer walls of the Tower of London. Why only one quarter? Because this coin is just the first release of a four-coin Tower of London series, that when placed together present the entire outer wall!

Not only is the first coin in in an exciting new series, but it’s also a first for the Royal Mint as it represents the first time that a special Tower mint mark has been featured on an official United Kingdom coin! The mint mark can be seen just to right of the Raven’s wings on the reverse of this £5 legal tender cupro-nickel coin. Plus, your coin will come in its original Brilliant Uncirculated (BU) condition, as fresh and crisp as the day it left the Mint!

Luckily for you, all that’s needed to gain the honor of protecting your own Guardian of the Tower is to make some room in your collection. Capture and share this fascinating piece of the Tower of London’s history by clicking one of these Tower of London Raven coins to your cart today!

Why not add some extra protection to your collection and secure this £5 legal-tender coin in Brilliant Uncirculated (BU) condition from The Royal Mint. Don’t wait or these Ravens will be available “Nevermore!”