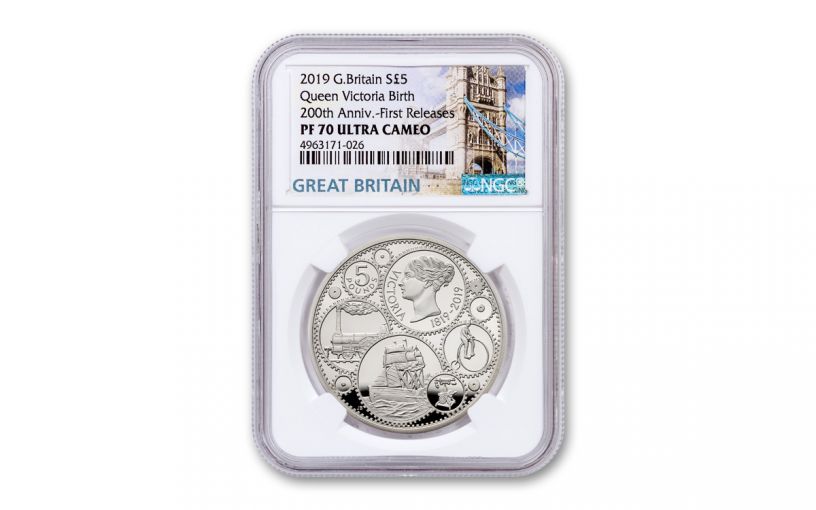 Availability: Out of Stock
This item is currently Out of Stock. Please sign up to be notified if this product becomes available.
Item #
350201
Add to Wish List Add to Wish List Wishlist is for registered customers. Please login or create an account to continue. Add to Compare
Product Description

2019 marks the 200th anniversary of Queen Victoria’s birth. Becoming Queen at the age of 18, Victoria reigned from 1837 to 1901 – a total of 64 years – and was the longest-reigning monarch in British history until she was surpassed in by Great Britain’s current monarch, her great-great-granddaughter Queen Elizabeth II. Synonymous with the British Empire’s industrial and economic expansion of the 1800s, her name is used to describe the times – The Victorian Era, an age when it was said the sun never set on the British Empire.

To pay tribute to the bicentenary of Victoria’s birth, Great Britain’s world-renowned Royal Mint has issued a series of special commemoratives that pay tribute to the woman whose children populated the Royal Houses of Europe and thus provided her with the unofficial title of “the Grandmother of Europe.” Struck in nearly an ounce of highly-pure 99.9% silver, this legal-tender £5 coin is a smashing example of numismatic quality and art. It depicts a young Queen Victoria surrounded by the historic innovations that occurred during her lifetime, including the Penny Farthing bicycle, the telephone, the SS Great Eastern (then the largest ship ever built), and a train representing the first-ever British Royal train journey in 1842. Rounding out the design is a special edge lettering that reads “Workshop of the World.”

Your 2019 Great Britain Silver Queen Victoria 200th Anniversary Proof has been graded by the Numismatic Guaranty Corporation (NGC) as being in flawless Proof-70 Ultra Cameo (PF70UC) condition, a distinction that means your perfectly-graded proof will have ZERO imperfections – showing all features and fields exactly as the engraver and mint intended. In addition, NGC has graded your proof to be a First Releases (FR) coin, a designation that means it was received by NGC or an NGC-approved depository within the first 30 days of its release. Collectors seek out these coins because they are produced with new dies and considered to have sharper strikes and deeper mirrors than those that are struck later.

Coin collectors, history buffs, royal watchers and silver stackers will all be vying for these coins. But with a limited mintage of just 7,500, there are far too few to go around. Hurry; add a piece of the Victorian Era to your collection now with the 2019 Great Britain Silver Queen Victoria 200th Anniversary Proof!

Thanks to the British television series Victoria starring Jenna Coleman, the popularity of the Royal Family, and the epic 200th anniversary of her birth, Queen Victoria has never been hotter. Don’t miss out, click one of these coins to your cart today!