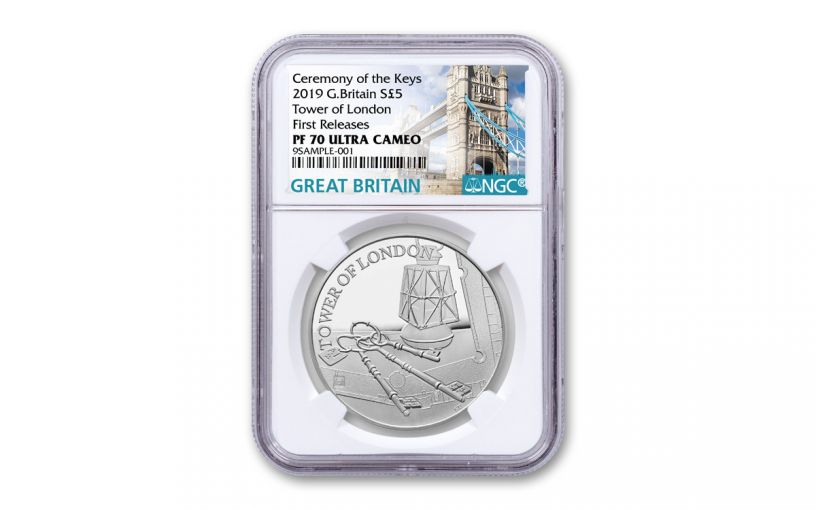 Availability: Out of Stock
This item is currently Out of Stock. Please sign up to be notified if this product becomes available.
Item #
354702
Add to Wish List Add to Wish List Wishlist is for registered customers. Please login or create an account to continue. Add to Compare

This Tower of London Coin Could be the “Key” to Your Collection!

This £5 legal-tender coin brilliantly depicts an image of a medieval-looking ring of keys tossed by a keymaster’s lantern. It’s a marvelous design struck in 28.28 grams of 92.5% fine silver that pays tribute to a tradition that began nearly 700 years ago by a king who was royally upset about the lackadaisical attitude of the guards posted at the Tower of London.

Your 2019 Great Britain £5 Tower of London Ceremony of the Keys Silver Proof has been graded by the Numismatic Guaranty Corporation (NGC) as being in flawless Proof-70 Ultra Cameo (PF70UC) condition, a distinction that means your perfectly-graded proof will have ZERO imperfections – showing all features and fields exactly as the engraver and mint intended. In addition, NGC has certified that your proof is a First Day of Issue (FDI) coin, meaning it was received by NGC or an NGC-approved depository by the release date or on the business day within 24 hours of the official release date. Collectors seek out these coins because they are produced with new dies and considered to have sharper strikes and deeper mirrors than those that are struck later.

Each coin in this four-piece series is part of a greater whole. When all four coins of the series are arranged together it completes an image of the Tower of London. It’s a fascinating aspect to these coins – but only possible if you secure this fourth and final release while it’s still available! Only 4,000 of these silver proofs will be struck, so reserve yours now!