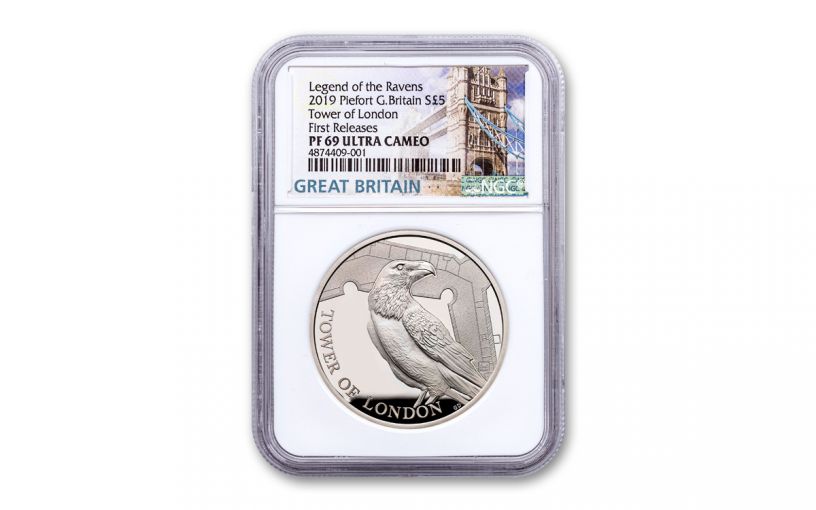 Availability: Out of Stock
This item is currently Out of Stock. Please sign up to be notified if this product becomes available.
Item #
344928
Add to Wish List Add to Wish List Wishlist is for registered customers. Please login or create an account to continue. Add to Compare

Not only is the first coin in in an exciting new series, but it’s also a first for the Royal Mint as it represents the first time that a special Tower mint mark has been featured on an official United Kingdom coin! The mint mark can be seen just to right of the Raven’s wings on the reverse of this £5 legal tender coin. Plus, your coin has been graded by the Numismatic Guaranty Corporation (NGC) as being in near-perfect Proof-69 (PF69) condition, a distinction that means your almost-flawless coin will showcase an impressive full strike and indistinguishable imperfections – well above and beyond the quality of the vast majority of coins in the series.

In addition, your proof will also be certified as a First Releases (FR) coin by NGC, meaning that it was received by NGC or an NGC-approved depository within the first 30 days of the coin’s release. Collectors seek out these coins because they are produced with new dies and considered to have sharper strikes and deeper mirrors than those that are struck later. Also, the population of coins labeled First Releases is only a fraction of the total mintage. It will come sonically sealed in an acrylic holder with an exclusive Tower Bridge label