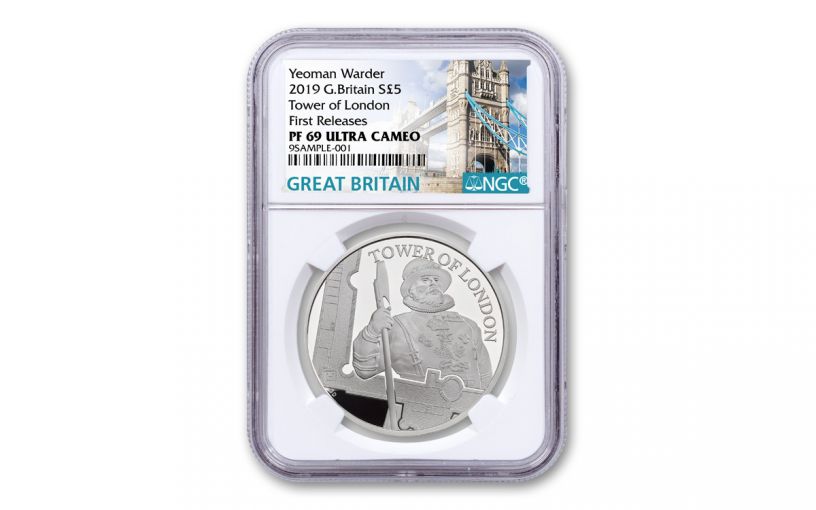 Availability: Out of Stock
This item is currently Out of Stock. Please sign up to be notified if this product becomes available.
Item #
351991
Add to Wish List Add to Wish List Wishlist is for registered customers. Please login or create an account to continue. Add to Compare
Recommended Products
Product Description

Your 2019 Great Britain £5 Tower of London Yeoman Warders Silver Proof has also been graded by the Numismatic Guaranty Corporation (NGC) as being in near-perfect Proof-69 (PF69) condition, a distinction that means your almost-flawless coin will showcase an impressive full strike and indistinguishable imperfections – well above and beyond the quality of the vast majority of coins in the series. In addition, NGC has certified your proof to be a First Releases (FR) coin, a designation that means it was received by NGC or an NGC-approved depository within the first 30 days of its release. Collectors seek out these coins because they are produced with new dies and considered to have sharper strikes and deeper mirrors than those that are struck later.

Each coin in this four-piece series is part of a greater whole. When all four coins of the series are arranged together it completes an image of the Tower of London. It’s a fascinating aspect to these coins – but only possible if you secure this third release while it’s still available! Only 4,000 of these silver proofs will be struck, so reserve yours now!