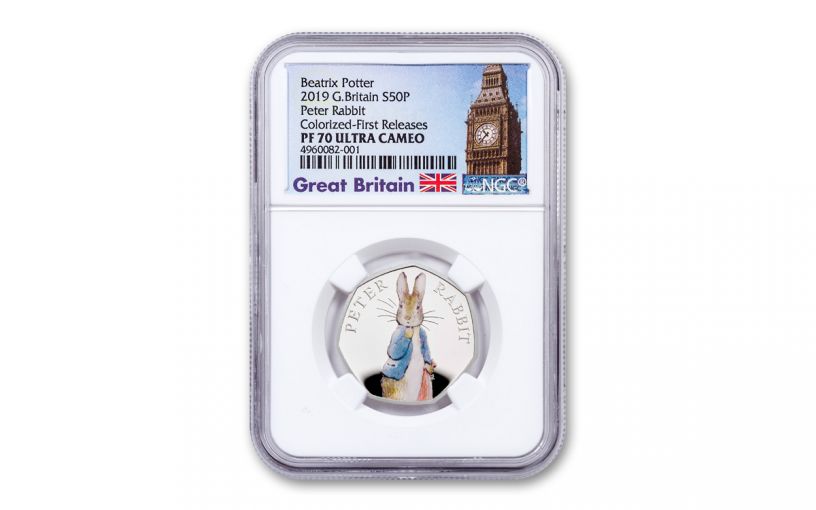 Availability: Out of Stock
This item is currently Out of Stock. Please sign up to be notified if this product becomes available.
Item #
348412
Add to Wish List Add to Wish List Wishlist is for registered customers. Please login or create an account to continue. Add to Compare
Product Description

Every March for the past three years, Great Britain’s Royal Mint has rolled out a new set of coins that pay tribute to one of the world’s most famous rabbits, that vegetable-loving bunny himself, Peter Rabbit™. Beatrix Potter’s mischievous little bunny returns in 2019 with an all-new design on a special limited-edition proof that has been selectively colorized in a style reminiscent of Potter’s distinctive watercolor illustrations.

Struck in 8 grams of 92.5% British Sterling silver, this year’s release captures Peter in a moment of thought. He’s wearing his familiar blue coat and debating the merits of once again sneaking into Mr. McGregor’s garden. We all know he will, risking life and limb to barely escape, losing his clothes in the process. As a reminder to his folly, Mr. McGregor makes a scarecrow out of Peter’s fancy new clothes and he gets a stern scolding from his mother.

Each legal-tender 50-pence coin in this offer has been graded by the Numismatic Guaranty Corporation (NGC) as being in flawless Proof-70 Ultra Cameo  (PF70UC) condition, a distinction that means your perfectly-graded proof will have ZERO imperfections – showing all features and fields exactly as the engraver and mint intended! In addition, NGC has graded your 2019 Great Britain Peter Rabbit Silver Proof to be a First Releases (FR) coin, a designation that means your coin was received by NGC or an NGC-approved depository within the first 30 days of the its release. It will come sonically sealed in an acrylic holder and encapsulated with an exclusive British-themed Big Ben label.

Peter’s first appearance in The Tale of Peter Rabbit was published in 1902 and catapulted the naughty young bunny to fame around the world. Beatrix Potter’s story has proven to be so popular and enduring that Peter Rabbit is still one of the most treasured characters in children’s literature today nearly 120 years later! It comes as little surprise that the Royal Mint’s Peter Rabbit coins have proven to be so popular. They make perfect gifts for fans of Beatrix Potter, or to celebrate occasions such as christenings or births. Just 30,000 of these wonderful coins have been struck, so hurry and start your 2019 collection with the fourth official Peter Rabbit 50-pence coin from The Royal Mint. It’s a coin that’s sure to be treasured by you and your family for many years to come.

Beatrix Potter’s Peter Rabbit returns for a fourth year on these 2019 Great Britain Peter Rabbit Silver Proofs. Put a hop in your step and click one to your cart right now!