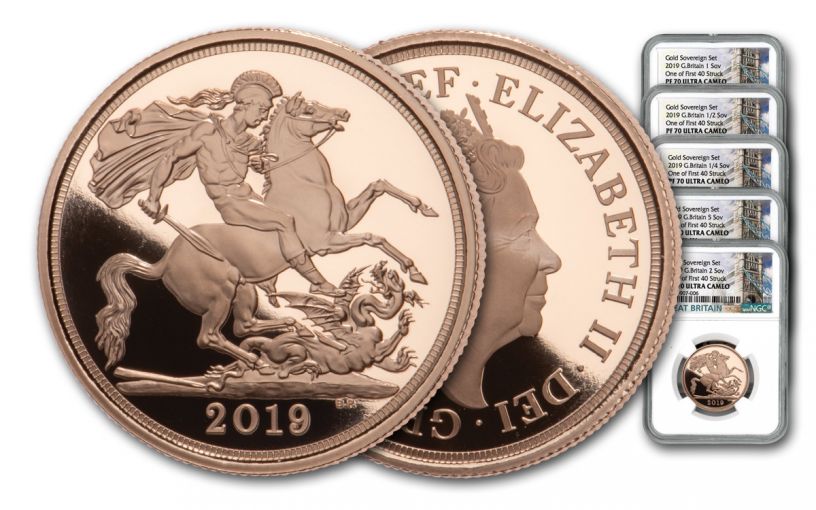 Availability: Call-In Only
This item is only available on a Call-In basis. Please call 1-800-510-6468 to speak to a representative.
Item #
342295
Add to Wish List Add to Wish List Wishlist is for registered customers. Please login or create an account to continue. Add to Compare

Great Britain’s Gold Sovereign is one of the world’s most popular bullion coins – and has been for more than two centuries. That’s why each year when the collector proof version is released, collectors are beside themselves with anticipation at acquiring these big, beautiful gold coins. With small limited editions, however, it’s quite often difficult to acquire the different denominations in each year’s release – and in 2019 it just got a whole lot harder because the British Royal Mint actually reduced the mintage for these always-in demand proof coins!

The shock waves felt around the coin world by the decision have had an immediate effect. For example, in 2018 The Royal Mint issued 13,350 Gold Sovereign £1 proofs compared to just 9,500 in 2019 – that’s nearly a 29% decrease meaning thousands of collectors who purchased last year’s Sovereign will miss out this year!

Here’s your chance to get not only this year’s £1 Gold Sovereign, but the complete five-coin set of 2019 Gold Sovereign proofs! This beautiful set of five Proof coins is the most comprehensive collection in the 2019 release. This superb set of Gold Sovereigns is limited to just 750, and it includes the large £5 Gold Sovereign that is exclusively available only in this set! Besides the £5 and £1 Sovereigns, this set also includes the £2 Double Sovereign and the Quarter and Half Sovereigns. All five coins are struck in 22-karat gold and come complete with a certificate of authenticity and a booklet about Great Britain’s Gold Sovereign.

Your coins will come graded by the Numismatic Guaranty Corporation (NGC) as being in perfect Proof-70 Ultra Cameo (PF70UC) condition, a distinction that means your perfectly-graded proofs will have ZERO imperfections – showing all features and fields exactly as the engraver and mint intended! In addition, these proofs are all certified as being First Strike (FS) coins by NGC, meaning that your coins are among the first struck by the mint and were verified within the first 30 days of issue.

The British Sovereign has one of the longest histories of any running series. It dates back to 1817, when the coin debuted with an image of King George III on the obverse and a shield and crown motif on the reverse. The reverse was later replaced with what is today considered to be a classic image: Benedetto Pistrucci’s design of Saint George slaying a dragon – the same design that the coins in this set share. Each coin produced in the series, which ran from 1817-1918, again in 1925, and from 1957 to the present, has been produced according to the purity standards set forth in the Act of 1816. Even the weight of the full sovereign remains relatively constant at 7.988052 grams, which was rounded to 7.98805 grams by the Coin Act in 1971. Today, that tradition is alive and well with this latest issue of the series.

With fewer gold sovereign available this year you must act now to make sure you don’t miss out. Place your Five-Piece Gold Sovereign Set in your cart today to avoid disappointment later!

The British Royal Mint is among the most highly respected mints in the world. In fact, more than 50 foreign countries entrust their minting to it. Its centuries of continuous history included the service of Sir Isaac Newton, who served as Mint Master for nearly three decades, bringing his knowledge and skill to bear on Britain’s coinage. This set continues what many consider Britain’s most historic and important collections. Act now, because these sets will not be available for long!