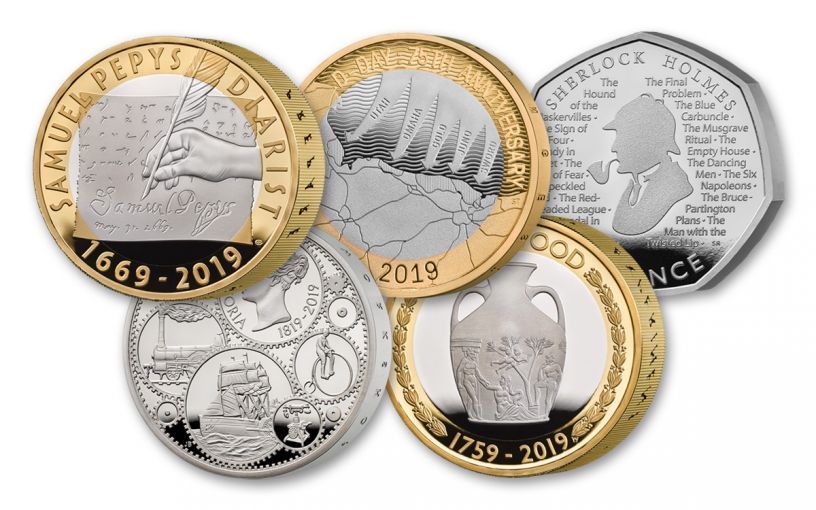 Availability: Out of Stock
This item is currently Out of Stock. Please sign up to be notified if this product becomes available.
Item #
344207
Add to Wish List Add to Wish List Wishlist is for registered customers. Please login or create an account to continue. Add to Compare

The Royal Mint’s Finest of 2019, Struck as Double-Thick Piedforts

Proof coins are the epitome of the minter’s art, with frosty designs and glamorous, mirror-like fields. Piedforts are coins struck with double-thick planchets for a luxurious heft not found on standard coins. Put them both together, strike them in 92.5% Sterling silver and add five new beautiful designs and you have the limited-edition 2019 Silver Proof Piedfort Five-Piece Commemorative Coin Set from The Royal Mint.

This year’s set includes one-year-only designs commemorating the most important anniversaries of 2019. Those events include:

Each coin features an intricate design and is official legal tender. Only 1,000 of these sets exist, making them highly prized among collectors. Don’t miss out!

Great Britain’s 2019 Silver Proof Piedfort Five-Piece Commemorative Coin Set pays tribute to not just one milestone in English history, but FIVE milestones! With just 1,000 sets for the entire world, the time to get one of these sets is now. Click one to your cart right now!