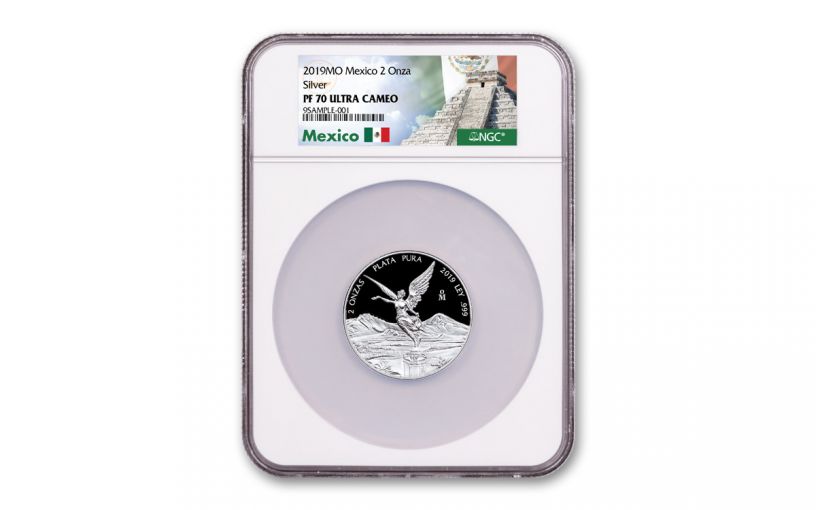 Availability: Out of Stock
This item is currently Out of Stock. Please sign up to be notified if this product becomes available.
Item #
347460
Add to Wish List Add to Wish List Wishlist is for registered customers. Please login or create an account to continue. Add to Compare

The Beauty of the Two-Ounce Silver Libertad Returns for 2019

While Mexico’s ties to Spain are evident in daily life from the language to bullfights, the country’s citizens take tremendous pride in their independence, which is precisely what Mexico’s world-renowned Libertad coin series celebrates. Mexican silver is world-renowned for its quality and consistency – and has been for more than 500 years. The 2019 Silver Libertad follows in that unparalleled tradition.

Silver Libertads from Mexico are popular the world over not only for their silver content, but also for their limited mintages and exquisite beauty. And that beauty has never looked better then on this 2019-dated coin that’s struck in two ounces of 99.9% silver and measures an impressive 48 mm in diameter! Unlike the regular one-ounce Libertads released each year since 1982; the two-ounce coins are produced in smaller numbers, making these Libertads even more coveted by collectors.

Your coin has been graded by the Numismatic Guaranty Corporation (NGC) as being in flawless Proof-70 Ultra Cameo (PF70UC) condition, a distinction that means your perfectly-graded proof will have ZERO imperfections – showing all features and fields exactly as the engraver and mint intended. In addition, it will come sonically sealed in an acrylic coin holder and encapsulated with an exclusive Mexico-themed label!

First released as part of the Silver Libertad Series in 1996, the two-ounce coin features the same design as its smaller one-ounce counterpart. Now in its 24th year of being issued, the Silver Libertad features one of the most recognizable representations of Mexican independence. Its design of the Winged Victory is based on the statue that stands atop the Mexican Victory Independence Column in Mexico City. The column and statue were erected in 1921 to mark the 100th anniversary of Mexico’s independence from Spain.

With its pure silver content and limited mintage, the 2019 Two-Ounce Silver Libertad Proof is sure to appeal to coin collectors and silver stackers alike. Don’t delay – add one of these epic silver coins to your collection today!

The Silver Libertad coin is among the most anticipated issues among collectors every year. The coin exemplifies extraordinary artistic beauty while perfectly representing the tremendous pride that Mexicans have in their country’s rich history. Its design also incorporates pieces of Mexico’s stunning natural beauty. Whether you have Mexican heritage, a love for Mexico, or simply appreciate the remarkable beauty of this unique series, order this 2019 Mexico Two-Ounce Silver Libertad Proof at GovMint.com today!