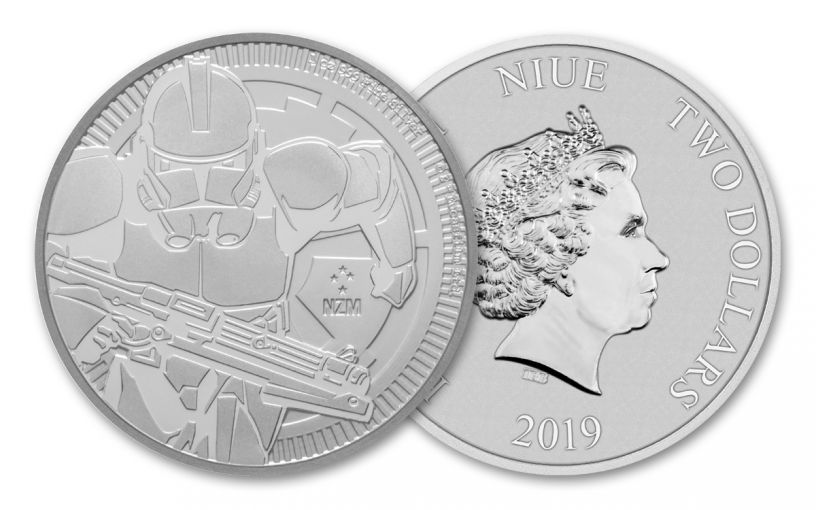 Availability: In Stock
This item will ship within 2 business days.
Item #
344861
Review this product
Add to Wish List Add to Wish List Wishlist is for registered customers. Please login or create an account to continue. Add to Compare
Complete your collection with one of these:
Product Description

Star Wars™ has captured the imaginations of generations of fans with its complex portrayal of good versus evil played out on a galactic scale amid a tableau of mind-blowing special effects. Often, the characters who have suffered the most have been the guys in white – no, not the good guys, the BAD guys, the troops of the Galactic Empire. Not only that, but there are actually two different types of soldiers, the Stormtroopers and the lesser-known Clone Troopers!

Now, the Clone Troopers get their due in the New Zealand Mint’s latest release in its Star Wars bullion coin series that shows a new image of Clone Trooper racing towards you with his laser blaster at the ready. It’s a dynamic, action-packed image struck in a full ounce of highly-pure 99.9% fine silver. In addition, the coin is officially licensed by Lucasfilm and Disney so you know it lives up to the high standards Star Wars fans have come to expect.

So, just what IS the difference between a Stormtrooper and a Clone Trooper? Sure, they both wear the same white body armor and they both get killed, destroyed, vaporized and otherwise liquidated in ways that are often as comedic as they are melodramatic, but that’s where the similarities end. Clone Troopers are actually clones made from the DNA of bounty hunter Jango Fett’s genetic template. They’re mass produced and ready to go into action – and just as disposable as yesterday’s newspaper! Stormtroopers, on the other hand, are regular people who enlisted in the Imperial Army and were not bred from birth to seek out and destroy “rebel scum” and other enemies of the Empire.

As the disposable bad guys in cinema’s most successful franchise, Clone Troopers are the minions you love to hate. The new 2019 Niue Star Wars Clone Trooper One-Ounce Silver Coin is the perfect piece to start or add to your own Star Wars collection. Coin collectors, Star Wars fans and silver stackers alike will all be vying for these coins so order one – or several – right now!

Add the 2019 Niue Star Wars Clone Trooper One-Ounce Silver Coin to your collection! Or better yet, add several and amass your own army. Don’t wait – click some to your cart today!