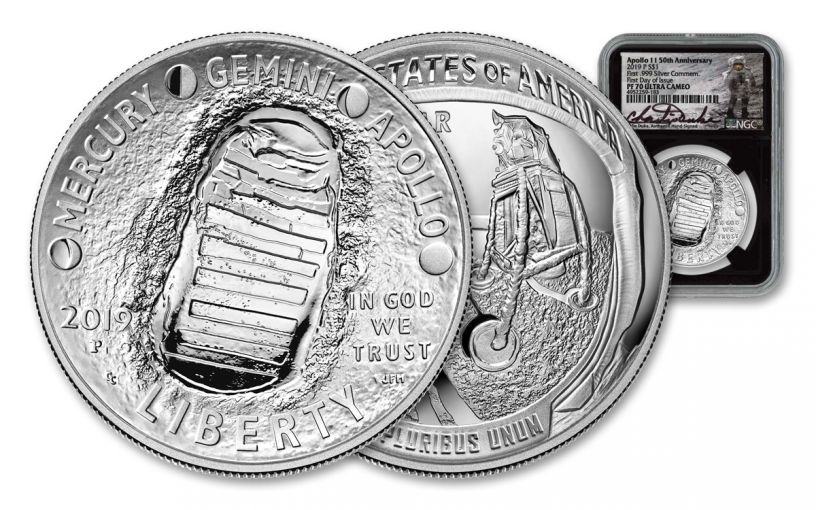 Availability: Call-In Only
This item is only available on a Call-In basis. Please call 1-800-510-6468 to speak to a representative.
Item #
343766
Add to Wish List Add to Wish List Wishlist is for registered customers. Please login or create an account to continue. Add to Compare

The design recreates the famous photograph snapped by Buzz Aldrin of Armstrong standing next to the lunar module Eagle as seen through Buzz’s visor.

In addition, NGC has certified your 2019-P Apollo 11 50th Anniversary Silver Dollar Proof to be a First Day of Issue (FDI) coin, meaning it was received by NGC or an NGC-approved depository by the release date or on the business day within 24 hours of the official release date. Each coin will come sonically sealed in an acrylic holder sealed with a label bearing the hand-signed signature of astronaut Charlie Duke, who not only served as CAPCOM (Capsule Communicator) for the Apollo 11 mission – meaning he was the voice of mission control for the astronauts—but he later became the youngest person to ever set foot on the lunar surface.

Put the first man on the moon into your collection and honor mankind’s crowning achievement with the 2019-P $1 Apollo 11 50th Anniversary One-Ounce Silver Dollar Proof. Order yours now!