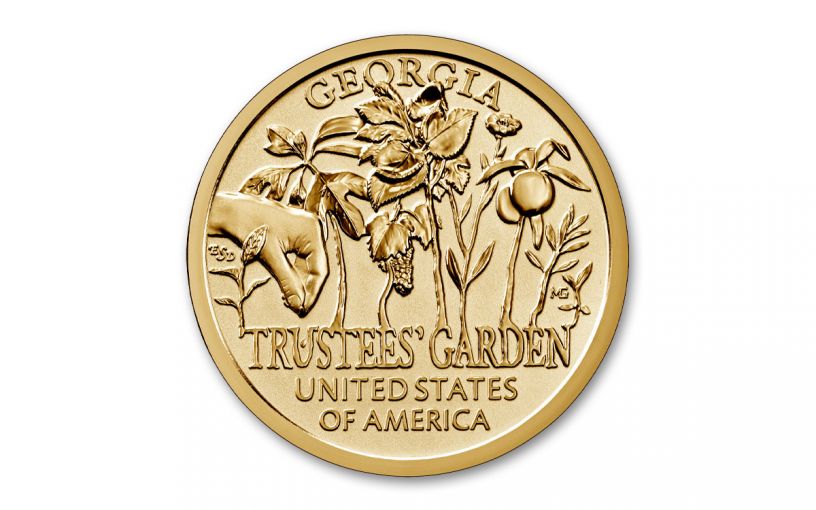 Availability: In Stock
This item will ship within 2 business days.
Item #
359955
Add to Wish List Add to Wish List Wishlist is for registered customers. Please login or create an account to continue. Add to Compare

The series was launched in 2018 with a single coin paying tribute to the first U.S. patent. Beginning in 2019, four one-year-only Innovation Dollars were released each year bearing different reverses. The coins in the multi-year series will be designed and minted to honor significant American innovation and pioneering efforts of individuals or groups in each of the 50 States, District of Columbia, and U.S. territories. It will conclude in 2032.

Here’s your chance to get the fourth coin of 2019, the Georgia Dollar. This stunning coin celebrates the Trustees Garden, America’s first agricultural experimental garden in fabulous Reverse Proof condition! Struck with exquisite precision by the San Francisco Mint, this Reverse Proof coin is the opposite of a standard Proof in that it features a frosted background with design elements polished to a mirror-like finish. Each coin will also come shipped in its original government packaging consisting of a colorful four-panel packet that includes the coin’s Certificate of Authenticity.

The reverse design depicts a hand planting seeds to reflect the variety of species and plants grown in the Trustees’ garden. Inscriptions are “GEORGIA,” “TRUSTEES’ GARDEN” and “UNITED STATES OF AMERICA.” The Georgia coin pays tribute to the Trustees’ Garden that was established in Savannah, Georgia in 1734 by James Oglethorpe. The garden originally produced a variety of essential plants and trees out of which Colonists could determine which were the best for Georgia’s climate. The coin’s obverse features a common design that will be used throughout the series. It depicts the Statue of Liberty along with a small privy mark of a stylized gear, representing industry and innovation. In addition, like the other coins issued in 2019, the Georgia Dollar features the incused edge inscriptions: “2019,” “S” mint mark, and “E PLURIBUS UNUM.”

The beauty and quality of these coins will make them an excellent addition to your collection or a perfect starting point from which you or someone you know can start building a collection! Just 75,000 of these unique 2019-S $1 American Innovation™ – Georgia Reverse Proofs will be struck for worldwide release. Add one – or several – to your cart today!