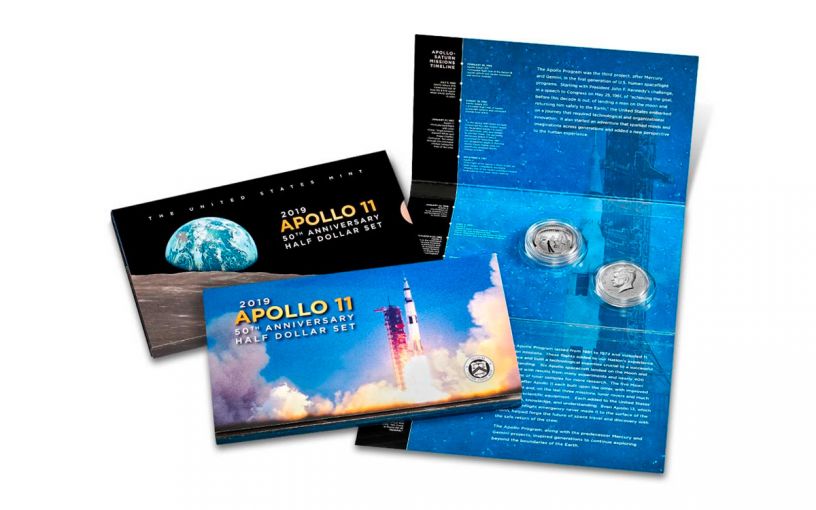 Availability: Out of Stock
This item is currently Out of Stock. Please sign up to be notified if this product becomes available.
Item #
344840
Add to Wish List Add to Wish List Wishlist is for registered customers. Please login or create an account to continue. Add to Compare

Now you can get this coin along with a specially-struck Kennedy Half Dollar that is available only in this commemorative two-piece set. As you probably know, President John F. Kennedy called for the United States to land a man on the Moon by the end of the 1960s. Sadly, Kennedy never saw his call to action fulfilled. An assassin’s bullet may have cut him down, but America prevailed and completed the task JFK had set out before her. The Kennedy Half Dollar in this set is a 2019-dated coin struck at the San Francisco Mint with an Enhanced Reverse Proof finish. This special Kennedy Half Dollar is limited to just 100,000 coins and will not be made available by the Mint individually or as any other packaging option.

Not only were both of these coins beautifully struck at the San Francisco Mint, each coin will come sonically sealed in an acrylic holder that commemorates the 50th anniversary of the first lunar landing in 1969 with a special Moon display core that resembles the Moon’s surface. Your exclusive two-piece set will also arrive in its official government packaging.

With just 100,000 of these historic 2019-S Apollo 11 50th Anniversary 50¢ Two-Piece Proof Sets available, a quick sell-out is expected. As a one-year-only issue, these curved coins will never be struck by the U.S. Mint again. When they’re gone, they’re gone! Don’t miss this historic release – it’s one small purchase for you and one giant leap for your collection!

Put the first man on the moon into your collection and honor mankind’s crowning achievement with the 2019-S Apollo 11 50th Anniversary 50¢ Two-Piece Proof Set. Order yours now!