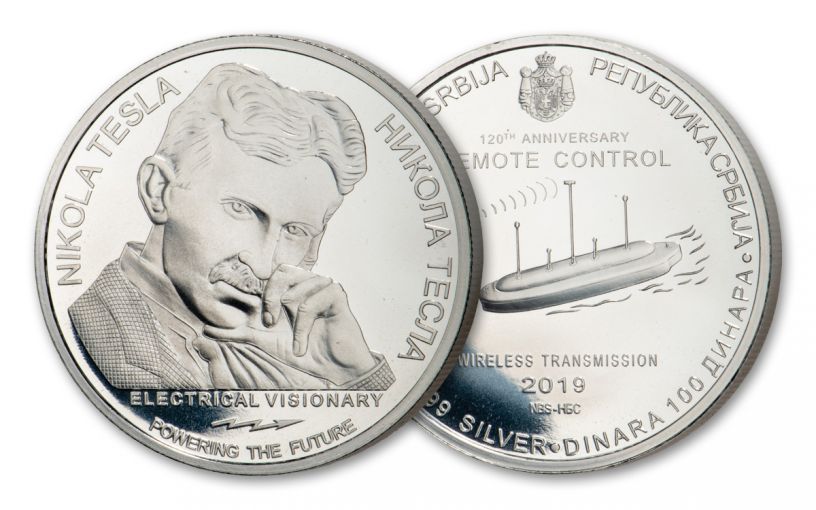 Availability: Out of Stock
This item is currently Out of Stock. Please sign up to be notified if this product becomes available.
Item #
347188
Add to Wish List Add to Wish List Wishlist is for registered customers. Please login or create an account to continue. Add to Compare

Pay tribute to the 120th Anniversary of Remote Control With Sold-Out Silver Coin!

Thanks to modern technology, we don’t have to direct our kids to change the channel for us like our parents did. We simply pick up a little hand-held device and change the channel by remote control. The “remote” may seem like a relatively new innovation, but in fact it was first debuted by renowned Serbian-American inventor Nikola Tesla at the Electrical Exhibition of 1898 held in New York City’s Madison Square Garden.

In honor of the 120th anniversary of this groundbreaking invention, Serbia has issued the second release in its series of coins commemorating the genius of Nikola Tesla. These legal-tender coins are struck in a full ounce of highly-pure 99.99% silver and feature not only the image of the scientific pioneer, but one of his greatest discoveries – the radio-controlled boat he used to demonstrate his invention. The low-lying steal craft was about four feet in length and easily skimmed across a small pool of water in a tour de force that cemented Tesla’s patent for his work. Tesla had hoped that the United States Navy would buy the idea of his remote-controlled boats but was rejected by the Navy Brass on the grounds that they thought the technology was too flimsy for war. Ironically, less than two decades later the German navy used remotely controlled boats loaded with explosives to attack Allied ships during World War I.

You’d think with a résumé such as his that Tesla’s name would be a household word. Unfortunately, Tesla sold most of his patents, and the fame generated by his discoveries was bestowed onto others. Discarded and forgotten, he died in 1943 alone and penniless in a New York City hotel. It wasn’t until a 2017 episode of the hit CBS comedy “Big Bang Theory” that Tesla’s name started to get its due among the general public. During the episode, the gang debates whether they are “Teslas,” who make their own discoveries, or “Edisons,” who build upon existing research. The spike in Google searches about Tesla was felt immediately.

Tesla and his remarkable invention take center stage on this beautiful coin. History buffs, science aficionados and silver stackers alike are sure to appreciate the design and high silver content. Just 50,000 of these coins have been struck and they are completely sold out at the mint! Don’t wait – get one for yourself and several others for the budding scientists in your life. Add them to your cart today!

Science enthusiasts, history buffs and silver stackers alike will all be vying to get their hands on this magnificent coin. Make sure you don’t end up on the outside looking in, reserve one – or several – today!