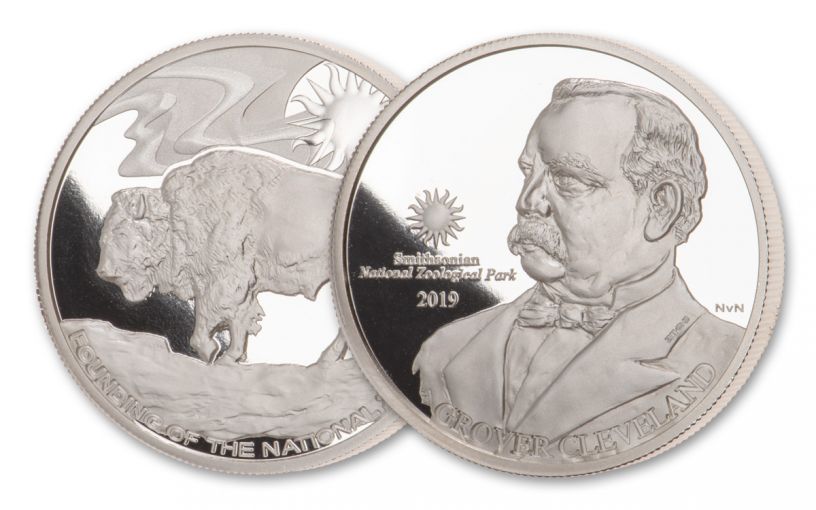 Availability: Call-In Only
This item is only available on a Call-In basis. Please call 1-800-510-6468 to speak to a representative.
Item #
340716
Add to Wish List Add to Wish List Wishlist is for registered customers. Please login or create an account to continue. Add to Compare

Did you know that when the National Zoo first opened in Washington, D.C. 130 years ago, people could only expect to see two types of animals: a small heard of Buffalo and a single Golden Eagle. Of course, this was still a genuine thrill, as most people form the East Coast had never seen a “Western” animal like the great American Buffalo. But when a small herd was brought to live in a pen behind the Smithsonian® Castle, families from all around the area began making routine trips to see the mighty beasts. The attraction proved to be so popular that a bill was eventually drafted and signed by then-President Grover Cleveland, and the National Zoo was born!

To honor this great institution, the Smithsonian has authorized the release of a series celebrating the founding of the National Zoo. Designed by six-time Coin of the Year-winner Natanya van Niekerk, known for her Gold Natura Africa Wildlife series from the South African Mint, the first release of the brand-new series displays the American Buffalo. It’s shown striding across the face of the coin above the words, “FOUNDING OF THE NATIONAL ZOO” and beneath a sky lit by the Smithsonian’s own sun emblem. The reverse features President Grover Cleveland along with the sun emblem and date.

As the first entry in a new series, this 2019 Smithsonian Buffalo at the Castle is sure to be a hit with collectors. Its buffalo theme is reminiscent of James Earle Fraser’s famous Buffalo Nickel design issued from 1913-1938 and now currently used on the U.S. Mint’s American Buffalo gold bullion coin. It also represents Niekerk’s first-ever American wildlife design – an astonishing coup for the Smithsonian to recruit such an accomplished designer!

You can secure this beautiful first entry of an all-new series struck in a full troy ounce of highly-pure 99.9% silver. Each comes in gorgeous Proof condition, meaning it was expertly crafted by the mint from hand-selected planchets, polished dies and multiple strikes to produce beautifully frosted details rising over mirror-like fields.

Don’t miss the beginning of this incredible series. With just 2,500 one-ounce silver proofs available you will need to order now to avoid disappointment later!

The 2019Smithsonian Buffalo at the Castle One-Ounce Silver Proof is the FIRST release in a new series honoring the Smithsonian National Zoo. Don’t miss out – click one to your cart today!