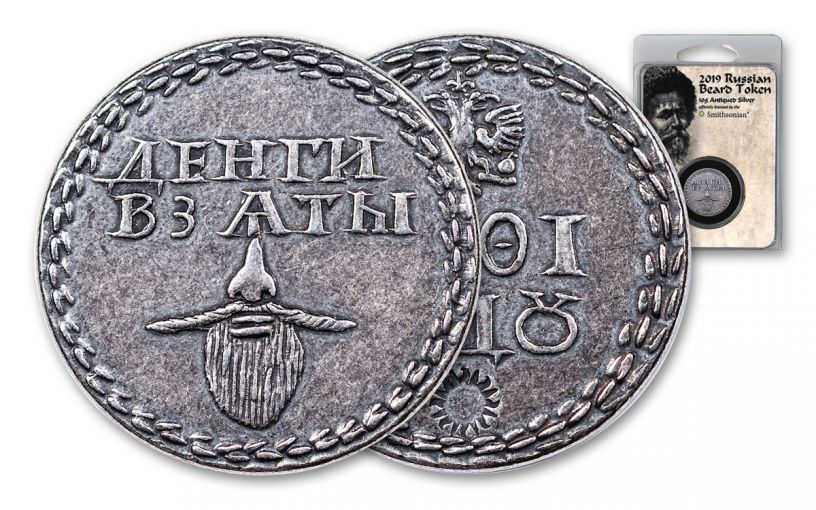 Availability: Out of Stock
This item is currently Out of Stock. Please sign up to be notified if this product becomes available.
Item #
342719
Add to Wish List Add to Wish List Wishlist is for registered customers. Please login or create an account to continue. Add to Compare
Product Description

Relive the Hair-Raising Past of the Infamous Russian Beard Token

There’s an old adage that says there’s nothing certain in this world except death and taxes – and that’s true of everything from gasoline to cigarettes to even the groceries we buy. But in your wildest dreams, did you ever expect to be taxed for having a beard? It happened in Imperial Russia during the time of Peter the Great after the young Tsar visited Europe in disguise to learn about Western Culture. He visited shipyards, factories, schools and even attended a session of Great Britain’s Parliament. Upon his return he embarked on an ambitious program of modernizing Russia. One of the ways he attempted to modernize Russia was to declare that all men should go beardless like the “modern” men he had met in Western Europe.

Instituted in 1705, it was a massively unpopular policy. It was so unpopular, in fact, that there were whispers from the Russian Orthodox Church that being seen in public without facial hair was blasphemous! Peter relented somewhat and said men could have their beards – but only if they paid a tax. The tax was as high as 100 rubles per year for nobles and as little as 1 kopek for commoners. Those who paid the tax were issued a token – silver for nobility and copper for commoners. To enforce the ban on beards, city guards would stop bearded men they found entering Russian cities, and if no token could be produced, the bewhiskered individuals would be arrested and fined! This quirky law was finally lifted in 1772 during the reign of Catherine the Great nearly 50 years after Peter’s death.

Now you can own an authentic silver replica of those same tokens with a carefully crafted reproduction officially licensed by the Smithsonian®. Based on rare examples of the original 1705 tokens in the Smithsonian’s numismatic collection, each carries a counterstamp to show the Smithsonian’s sun logo. These historic reproductions feature the lower part of a face with a nose, mouth, whiskers and beard below the words MONEY TAKEN in Cyrillic. The reverse features the Imperial Russian Eagle and the 2019 year date in Cyrillic.

In an effort to remain as true to the original Russian tokens as possible, these reproductions have been broadstruck on a 10-gram silver planchet. This method of striking coins and medals was common in the early 1700s when coins were struck without collars. Unlike today’s coinage where planchets are struck inside of a collar to produce reeded or smooth edges, broadstruck pieces like this token have rounded, uninform edges that are as unique as they are stunning. To further remain true to the original 1705 Beard Tokens held by the Smithsonian, each piece was coated with a carefully formulated antiqued finish that closely replicates the effects of time on a Silver token. Applied by hand, no two tokens will be exactly alike.

Available exclusively through GovMint.com and its partner network, just 5,000 of these unique pieces have been struck for worldwide release and each will come in a specially-designed Smithsonian-licensed acrylic case that includes a storycard and a certificate of authenticity. If you like beards, are an aficionado of Russian history or just like unique numismatic treasures, then this piece is for you! Secure your 2019 Smithsonian Russian Beard Silver Token today and share the hair-raising tail of its origins with all your family and friends!

Relive the hair-raising past of the infamous Russian Beard Token with these reproductions officially licensed by the Smithsonian®. Click one to your cart today!