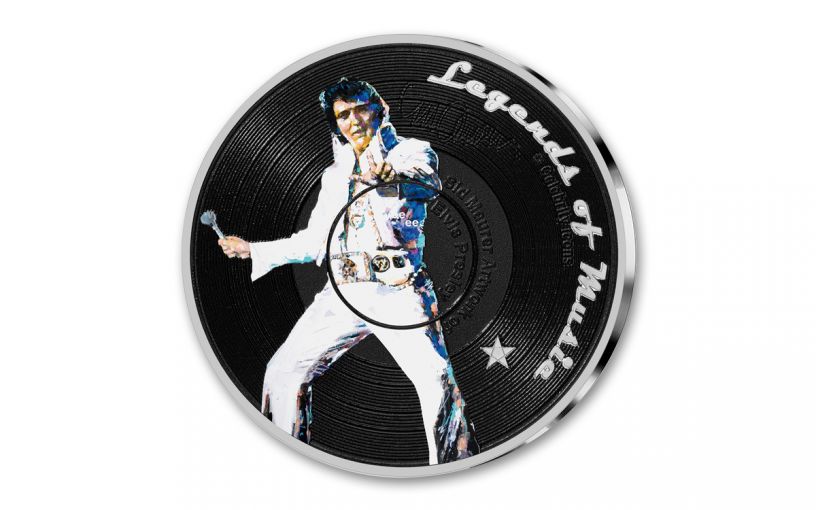 Availability: In Stock
This item will ship within 2 business days.
Item #
338366
Add to Wish List Add to Wish List Wishlist is for registered customers. Please login or create an account to continue. Add to Compare

Before CDs and music downloads there were vinyl records – big 33⅓ “platters” that came in beautifully-designed album sleeves often featuring the best artwork in the industry. One of the most famous artists to work in the record business was Sid Maurer, who as a skinny 17-year-old kid was hired by Columbia Records in New York City as an assistant art director. Throughout the 1950s, 1960s and 1970s, Maurer worked with some of the top recording acts designing album covers and promotional materials. He left the music business in the1990s to pursue his dreams of painting full-time and now his love of painting and his passion for music have combined to create a series of coins called the Legends of Music – and this is the FIRST time these coins have been made available!

In all, six different coins have been released paying tribute to David Bowie, Elvis Presley, Madonna, Michael Jackson, Mick Jagger and Bob Marley. Each legal-tender $5 coin is struck in one-ounce of 99.9% fine silver and uses the latest in colorization technology to mint each one with an image of a famous music star. On this coin you will see Sid Maurer’s rendition of Elvis Presley in full color. The large 50 mm diameter of these coins really lets you experience “The King” through Maurer's unique pop art style. Plus, the colorization process gives the coin the look and feel of an actual vinyl record! In addition, your 2019 Legends of Music Elvis Presley One-Ounce Silver Colorized Coin comes in gorgeous proof condition, meaning it was expertly crafted by the mint from hand-selected planchets, polished dies and multiple strikes to produce beautifully frosted details rising over mirror-like fields.

There’s no denying it: Elvis Presley left an indelible mark on American music and pop culture like no other entertainer. The first rock ‘n’ roll superstar, his music and films helped shape and define a generation. From his first appearance on the Ed Sullivan Show (during which he was famously shot only from the waist up), to being drafted by the army, to his triumphant televised ’68 Comeback Special clad from head to toe in tight black leather, Elvis was – and still is – simply “The King.”

Now, this dynamic music icon has been immortalized as one of artist Sid Maurer's "Legends of Music." Part of the Sid Maurer Celebrity Icons© series, only 10,000 of these proof coins have been authorized for worldwide release, and they’re sure to strike a chord with music lovers everywhere. Don't wait to score yours – the stage is set for you to order yours now before all of these Elvis coins leave the building and end up in the hands of some other lucky collectors!

Pay tribute to a music icon with the 2019 One-Ounce Silver Sid Maurer’s Legends of Music Elvis Presley Colorized Proof. Click one to your cart today!

© Sidney Maurer Stylized Original Art Portraits Exclusive Licenses by Celebrity Icons LLC. Without the participation of the celebrity or the estate.