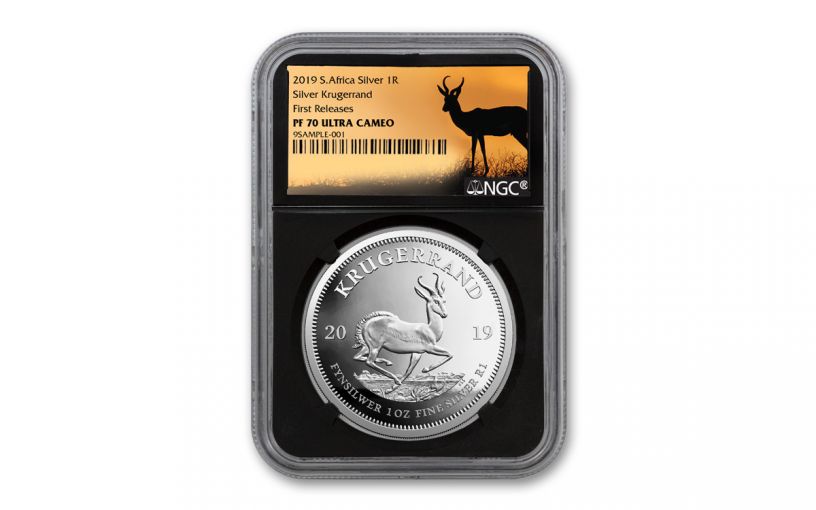 Availability: Out of Stock
This item is currently Out of Stock. Please sign up to be notified if this product becomes available.
Item #
344919
Add to Wish List Add to Wish List Wishlist is for registered customers. Please login or create an account to continue. Add to Compare

Now in its third year of striking these spectacular silver bullion coins, the artisans at the South African Mint are taking the Silver Krugerrand a step further and giving it the luxury treatment! Using specially treated and polished dies along with hand-selected 99.9% pure silver planchets, this 2019 One-Ounce Silver Krugerrand PROOF is the product of multiple strikes and innovative laser-etching technology. The result is a pristine coin that shines with mirror-like surfaces and distinct, razor-sharp details! In fact, your coin has been graded by the Numismatic Guaranty Corporation (NGC) being in gorgeous Proof-70 Ultra Cameo (P70FUC) condition, a distinction that means your perfectly-graded proof will have ZERO imperfections – showing all features and fields exactly as the engraver and mint intended.

In addition, NGC has graded your Silver Krugerrand to be a First Releases (FR) coin, a designation that means your coin was received by NGC or an NGC-approved depository within the first 30 days of its release. It will also be sonically sealed in an acrylic coin holder with a black display core and encapsulated with an exclusive Springbok label.