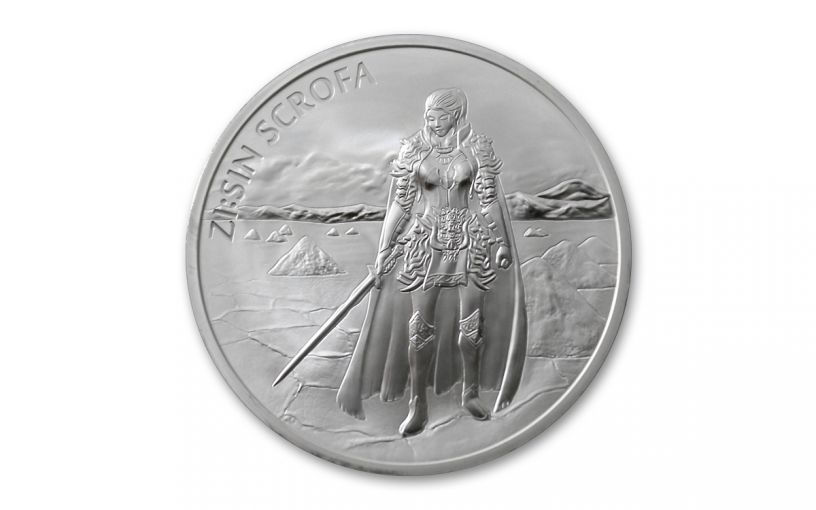 Availability: Out of Stock
This item is currently Out of Stock. Please sign up to be notified if this product becomes available.
Item #
347660

South Korea Offers New Slant on the Year of the Pig

Most people are familiar with the menagerie of animals that populate the lunar zodiac. Each year is represented by its own creature – a pig in 2019, a dog in 2018, a rooster in 2017, and so. But did you known that there are also 12 celestial guardians that protect mankind and serve mankind along with the lunar animals? It’s true, and now they form the basis of a fascinating series of pure silver medals from South Korea that puts a new spin on the traditional conception of the lunar year!

Struck by the government-owned Korea Minting and Security Printing Corporation (KOMSCO), the ZI:SIN Medal Series uses Korean gods and goddesses that directly relate to the lunar animals. Pronounced “Chingus,” ZI-SIN translates to the “Twelve Guardians,” in English. The third release in the series is this 2019-dated medal depicting the warrior goddess Scrofa. Minted in a full ounce of 99.9% silver, the medal shows the battle-hardened goddess dressed in armor and regalia reflective of the pig. Known as Justice Haechi, Scrofa stand resolute with her sword ready to defend the world against threats to the sacred Salt-Lake, a divine passageway between the mortal and immortal worlds.

The One-Ounce Silver Scrofa Medals in this offer come in gleaming Gem Brilliant Uncirculated (BU) condition, meaning that each is the product of a superb strike that places it firmly among the elite of the run. Just 40,000 of the magnificent silver beauties have been authorized for worldwide release. Coin collectors, lunar zodiac aficionados and silver stackers alike will all be battling for these coins. Now you can go to the front of the line and secure your 2019 ZI-SIN One-Ounce Silver Scrofa Medal today simply by clicking one or more to your cart today!

The 2019 South Korea ZI:SIN Scrofa One-Ounce Silver Medal offers a fascinating new take on the Lunar Year of the Pig with a Korean warrior goddess standing in for a pig. Make it part of your lunar collection today!