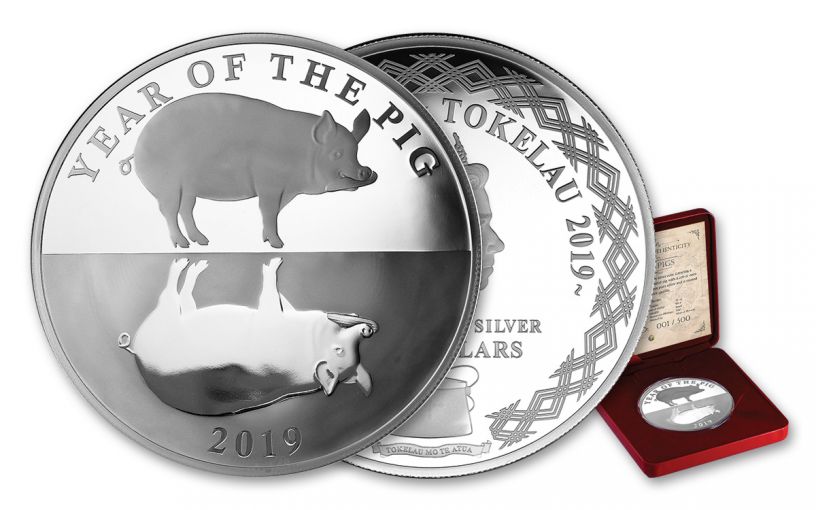 Availability: In Stock
This item will ship within 2 business days.
Item #
338661
Add to Wish List Add to Wish List Wishlist is for registered customers. Please login or create an account to continue. Add to Compare

Year of the Pig Coin Is Like Two Coins in One!

According to Asian folklore, the pig is an energetic go-getter who is always enthusiastic. In fact, their chubby jowls and floppy ears are considered to be signs of good fortune. It’s no wonder the pig is one of the Chinese lunar calendar’s 12 signs. But did you know the pig is the 12th and final sign? According to folklore, the Jade Emperor decreed the order of the zodiac would be decided according to the order in which the animals arrived. In some tales the pig was last because he overslept. In other tales a wolf destroyed his house and he had to repair it before he could attend the party.

That brings us to 2019 and it’s the Year of the Pig. To pay tribute to this popular lunar year, the island nation of Tokelau has issued an extremely limited proof coin that is actually like two coins in one! This beautiful coin is struck in a full troy ounce of 99.9% fine silver and features both a traditional proof finish AND a unique reverse proof finish!

This simple-yet-elegant design depicts two chubby pigs as mirror reflections of each other, each occupying one half of the coin. The upper half of the coin features a standard proof finish with a frosted image against a mirrored background. The coin’s lower half is just the opposite – a reverse proof finish with a mirrored image and a frosted background! The delightful design really stands out on this charming legal-tender coin that measures an impressive 65 mm in diameter. Plus, your proof will come in its original mint packaging and accompanied by a numbered certificate of authenticity.

This superb coin is sure to make an excellent addition to your collection or a fabulous gift for anyone you know born during the Year of the Pig. To date, all previous releases in the series have sold out within just a few days. And with a limited edition of only 500 coins, this is one party you don’t want to be late for, add one to your cart today!

This is your chance to celebrate the Year of the Dog in a big way. Just 500 of these special proofs will be released for the entire world – a number far too low for all the coin collectors, dog lovers and silver stackers out there who would like to get their paws on this coin. Order yours right away while you still can!