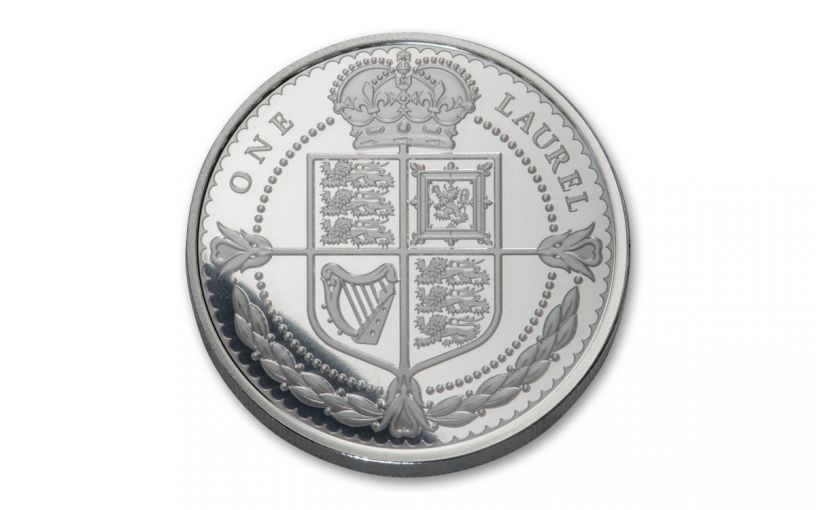 Availability: In Stock
This item will ship within 2 business days.
Item #
349491
Add to Wish List Add to Wish List Wishlist is for registered customers. Please login or create an account to continue. Add to Compare

After 400 Years, the Laurel Returns for the First Time in Silver

In the world of British coinage there is a tradition that dates back centuries: the portrait of the reigning monarch on circulating coinage face the opposite direction of the prior ruler. But in 1619, James I bucked that tradition with the introduction of the Laurel, which depicted him wearing a wreath upon his brow as he gazed in the opposite direction from previous coins bearing his image. Now, on the 400th anniversary of the original, the Laurel returns on a spectacular One-Ounce Silver Laurel – the first time in the coin’s 400-plus-year history that the Laurel has been struck in silver!

Like the original coins of James I, this modern Laurel depicts Queen Elizabeth II facing the opposite direction from her previous coins – a first for Great Britain’s popular reigning monarch, and a change made only for this particular release! Like King James I, Queen Elizabeth II wears the leafy laurel crown. The reverse design depicts a long cross over the Shield of the Royal Arms representing England, Scotland and Ireland.

Showing two sides of the monarch’s face was a brilliant idea for James I, who issued his laurel coins during a time when he was solidifying his power over the British Isles. Prior to becoming James I of England and Ireland, he was King James VI of Scotland. The son of Mary Queen of Scots, James I succeeded England’s Queen Elizabeth I. During his reign, the kingdoms of Scotland and England were individual sovereign states both ruled by James in personal union, so, in a sense, he really was a king with two faces!

For this special anniversary release, the Laurel denomination has been resurrected in 99.9% pure Silver. The designs are amazingly elegant – just as you would expect from a coin that was expertly crafted by the mint from hand-selected planchets, polished dies and multiple strikes to produce beautifully frosted details rising over mirror-like fields. This One Laurel coin is official legal tender in Tristan da Cunha, an island nation in the south Atlantic Ocean located midway between South America and Africa.

This Silver Laurel is a world-exclusive release. While the maximum worldwide limited edition for these coins is 2,019, they will be available for only a limited time! Order yours now!

Crown your collection with the 2019 Tristan da Cunha One-Ounce Silver One Laurel Proof. These historic coins will not last for long. Don’t wait; click it to your cart right now!