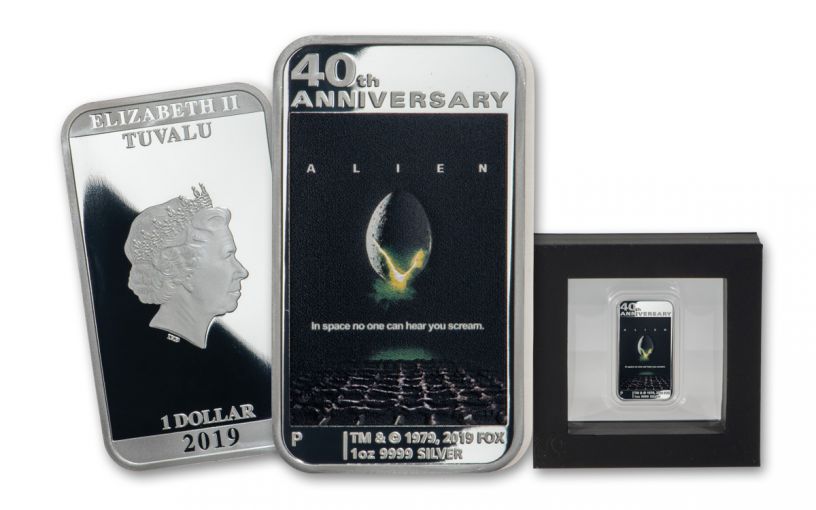 Availability: Out of Stock
This item is currently Out of Stock. Please sign up to be notified if this product becomes available.
Item #
343708
Add to Wish List Add to Wish List Wishlist is for registered customers. Please login or create an account to continue. Add to Compare

In Space, No One Can Hear You Scream

40 years ago, audiences shrieked in horror as the first Xenomorph appeared on screen, exploding from the chest of a crew member aboard the commercial space vessel Nostromo. It was the signature scene in the 1979 film Alien and spawned a franchise that has since risen to the height of the cultural zeitgeist, with multiple films, video games, comic books and more. Now you can add a piece of the film’s cinematic history to your collection with this Alien 40th Anniversary Silver Dollar.

Released by Australia’s world-renowned Perth Mint and issued on behalf of the island nation of Tuvalu, this Alien 40th Anniversary Silver Dollar is struck in one ounce of highly-pure 99.99% fine silver with a proof finish. Fittingly, it features the ominous image from the film’s poster – a mysterious and terrifying alien “egg” starting to burst open and unleash its horror upon the unsuspecting crew. The image is even more dramatic because it has been fully colorized with a luminous greenish-yellow glow seeping from the egg. Beneath the egg is the film’s famous tagline: “In space no one can hear you scream.”

Helmed by Ridley Scott in just his second time in the director’s chair and starring Sigourney Weaver as Ripley in only her third film, Alien seamlessly blended science-fiction concepts with good old-fashioned horror elements. The alien was designed by Swiss avant-garde painter H.R. Giger, and it along with the rest of the special effects team from the film would go on to win the Academy Award for Best Visual Effects. Filmed on a budget of $11 million, Alien went on to gross more than $200 million during its initial release. Today the film is considered to be one of the classics of the genre, ranking 7th all-time among science fiction films. In 2002, it was selected for preservation in the United States National Film Registry.

Officially licensed by Fox., the 2019 Tuvalu Alien 40th Anniversary One-Ounce Silver Proof is strictly limited to just 5,000 pieces. Each will come in its original Perth Mint packaging and accompanied by a numbered certificate of authenticity. Be sure to secure yours soon before our limited supply is picked off one by one leaving collectors screaming for more!

If it weren’t for Alien, we would never have had the pleasure of discovering such creatures as Chestbursters, Facehuggers, Space Jockeys, Synthetics and creatures with acid for blood. They’ve all made us scream in fright. What’s also scary is the thought of missing out on this coin. Click one to your cart now to avoid disappointment later!