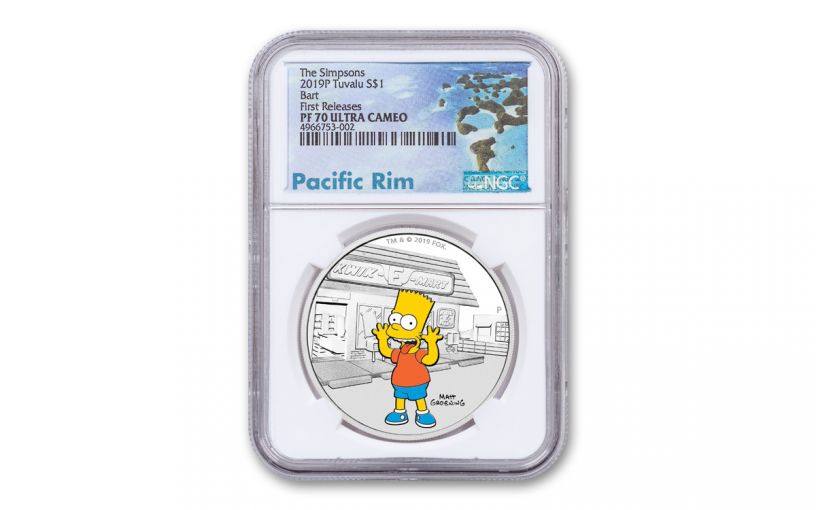 Availability: Out of Stock
This item is currently Out of Stock. Please sign up to be notified if this product becomes available.
Item #
349510
Add to Wish List Add to Wish List Wishlist is for registered customers. Please login or create an account to continue. Add to Compare

From making prank phone calls to plotting the destruction of his elementary school, Bart Simpson™ is television’s quintessential bad boy, a brat who’s basically drawn the blueprint on how to be a juvenile delinquent! So, while parents and educators everywhere have bemoaned his mischievous, rebellious, misunderstood and potentially dangerous behavior, fans of the hit Fox Television show The Simpsons™ have been holding their sides in laughter ever since Bart pulled his first craptacular stunt more than 30 years ago.

To pay tribute to the timeless appeal of The Simpsons, Australia’s world-renowned Perth Mint is releasing a five-coin series of silver proofs each paying tribute to a different member of the family in full color. The second coin in the series is this fabulous Bart Simpson Proof featuring everyone’s favorite troublemaker acting up outside of the Kwik-E-Mart. Officially licensed by Fox, this coin is struck in 99.99% pure silver and is legal tender in the South Pacific Island nation of Tuvalu.

The 2019 Tuvalu Bart Simpson One-Ounce Silver Proofs available in this offer have been graded by the Numismatic Guaranty Corporation (NGC) as being in flawless Proof-70 Ultra Cameo (PF70UC) condition, a distinction that means these perfectly-graded proofs will have ZERO imperfections – showing all features and fields exactly as the engraver and mint intended. In addition, NGC has graded Proofs to be First Releases (FR) coins, a designation that means they were received by NGC or an NGC-approved depository within the first 30 days of their release. It will also come sonically sealed in an acrylic holder with an exclusive Pacific Rim label.

The longest-running primetime scripted show in television history, The Simpsons was created by Matt Groening and originally aired in 1987 as 30-second shorts on The Tracey Ullman Show. Two years later, the dysfunctional clan premiered in its own regular series. Now, 30 years later, you can celebrate with Bart and the rest of the crazy Springfieldians on this irreverent coin release that’s destined to be a fan favorite. But you’d better be quick – just 5,000 of the coins will ever be released. So, don’t get bent, just get this 2019 Tuvalu Bart Simpson One-Ounce Silver Proof. Order yours today!

Coin collectors and fans of The Simpsons will both be scrambling for this coin. if you’re a fan of Bart Simpson or know someone who is, this is an absolute must-have! Don’t have a cow, Man, just click one of these collectible coins to your cart while they’re still available!