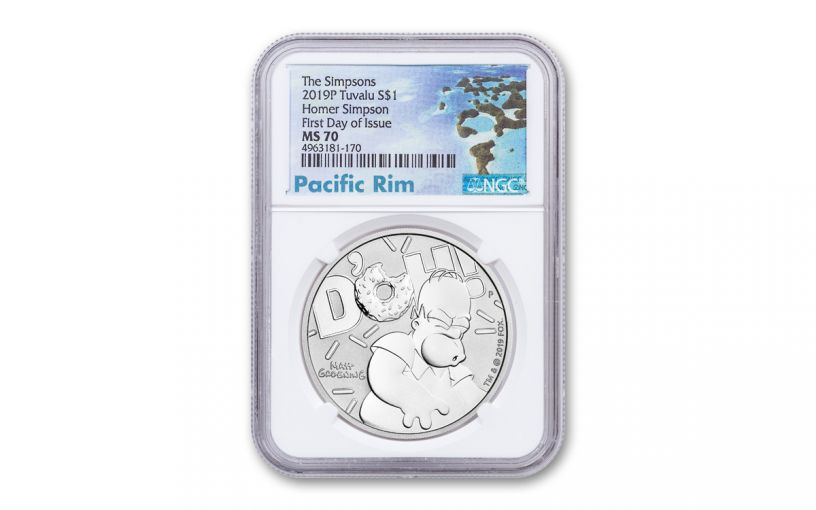 Availability: In Stock
This item will ship within 2 business days.
Item #
349810
Review this product
Add to Wish List Add to Wish List Wishlist is for registered customers. Please login or create an account to continue. Add to Compare
Complete your collection with one of these:
Product Description

He’s held jobs as a teacher, an astronaut, a singer, a monorail conductor, a chauffeur, a bodyguard, a snowplow driver, and many, many others; but what Homer Simpson™ is best remembered for being is the lazy and incompetent safety inspector for the Springfield Nuclear Power Plant. The star of the long-running hit Fox Television series The Simpsons™, Homer is now also the star of his own silver bullion coin.

Struck buy Australia’s award-winning Perth Mint and officially licensed by Fox Television, this coin captures the pure essence of Homer Jay Simpson, the dim-witted patriarch of the Simpson family. The design shows Homer getting bonked on the head by his favorite food staple: a donut. The donut, which is missing a bite, forms the “O” in Homer’s famous expression of failure: “D’OH!” It’s a delightfully comical design captured in a full ounce of highly-pure 99.99% silver.

In addition, your 2019 Tuvalu One-Ounce Silver Homer Simpson Coin has been graded by the Numismatic Guaranty Corporation (NGC) as being in flawless Mint State-70 (MS70) condition, a distinction that means your perfectly-graded coin will have ZERO imperfections – showing all features and fields exactly as the engraver and mint intended. Plus, NGC has graded your Homer Simpson coin to be a First Day of Issue (FDI) release, meaning it was received by NGC or an NGC-approved depository by the release date or on the business day within 24 hours of the official release date. It will come sonically sealed in an acrylic holder with an exclusive Pacific Rim label.

Those of us who follow Homer’s antics know that Homer would be quite smart if he didn't have a crayon stuck in his brain. But  despite his short temper and violent outbursts, he has been at the center of the longest-running primetime scripted show in television history. The Simpsons was created by Matt Groening and originally aired in 1987 as 30-second shorts on The Tracey Ullman Show. Two years later, the dysfunctional clan premiered in its own regular series.

Now, 30 years later, you can celebrate the magnificence that is Homer on this irreverent coin release that’s destined to be a fan favorite. But you’d better be quick – the Perth Mint struck just 25,000 of these coins and they’ve already been announced as being sold out at the mint! D’Ohn’t miss out; order yours today!

Coin collectors, silver stackers and fans of The Simpsons will both be scrambling for this coin. if you’re a fan of Homer Simpson or know someone who is, this is an absolute must-have! Put down that tasty donut and click one of these collectible coins to your cart while they’re still available