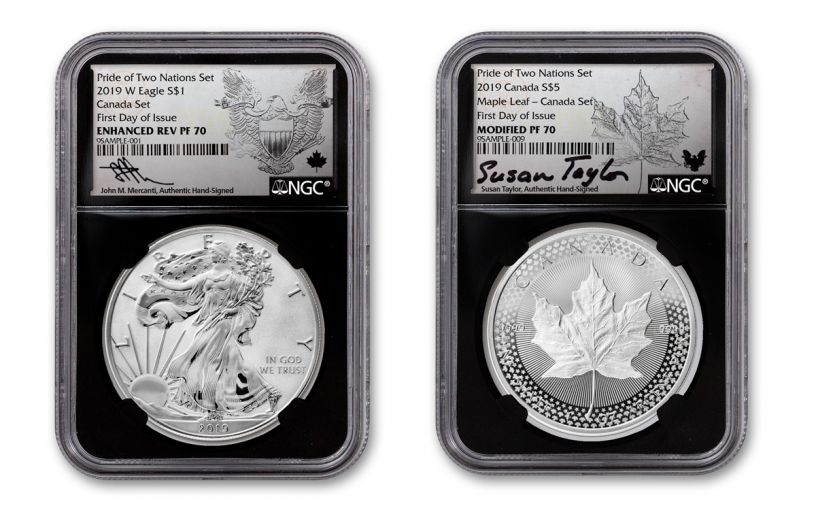 Availability: Call-In Only
This item is only available on a Call-In basis. Please call 1-800-510-6468 to speak to a representative.
Item #
351014
Add to Wish List Add to Wish List Wishlist is for registered customers. Please login or create an account to continue. Add to Compare
Product Description

Each 2019-dated release is a legal-tender coin – the $1 American Silver Eagle was struck at the West Point Mint in a full ounce of 99.9% fine silver while the $5 Maple Leaf was struck at the Royal Canadian Mint in a full ounce of highly pure 99.99% silver. Plus, the Numismatic Guaranty Corporation (NGC) has certified your coins to be First Day of Issue (FDI) coins, a designation that means they were received by NGC or an NGC-approved depository by the release date or on the business day within 24 hours of the official release date. Each coin will come sonically sealed in an acrylic holder with a black display core.

Just 110,000 of each coin has been struck with the U.S. Mint releasing 100,000 two-piece sets leaving just 10,000 sets from the Royal Canadian Mint – a release that is among the smallest Silver Eagle set pedigrees in the world! Now you can secure this extremely limited release complete with a mint display box from the Royal Canadian Mint. You must act fast, however, because collectors love first-ever releases with low edition limits. Reserve your set now!