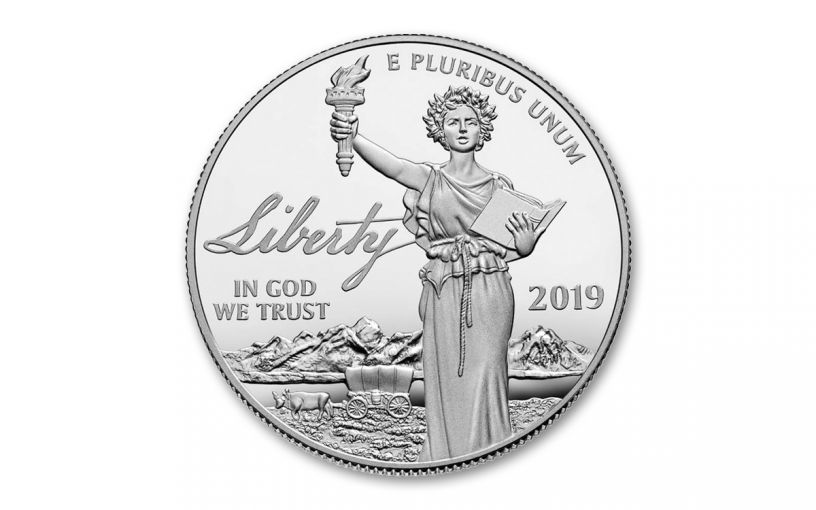 Availability: Out of Stock
This item is currently Out of Stock. Please sign up to be notified if this product becomes available.
Item #
345561
Add to Wish List Add to Wish List Wishlist is for registered customers. Please login or create an account to continue. Add to Compare

Since its debut in 1997, the American Eagle Platinum Proof had always featured John Mercanti's gorgeous close-up vision of the Statue of Liberty on the obverse. And while each year would bring a stunning new reverse design, Lady Liberty's crowned head appeared on the obverse side like clockwork.

In 2018, that changed as the U.S. Mint ushered the beloved annual release into its third decade with the first of a new series of artistically-rich designs inspired by the preamble to the Declaration of Independence. Planned as a three-year design arc, these three coins illustrate Lady Liberty guiding a young country under the self-evident truths “that all men are created equal, that they are endowed by their Creator with certain unalienable Rights, that among these are Life, Liberty and the pursuit of Happiness."

Now, in 2019, the second proof in the exciting numismatic trilogy is available as a vivid visual ode to “Liberty.” The design depicts Lady Liberty keeping watch over prairies, lakes and mountains as a Conestoga wagon carries a family of pioneers westward. Liberty’s parted lips suggest freedom of speech, her torch a guiding light, and her book represents the rule of law and its equal protection for all people. The common reverse features a bold American Eagle in flight with an olive branch clutched in its talons.

This spectacular coin was expertly crafted by the talented artisans at the West Point Mint from hand-selected one-ounce planchets of 99.95% pure platinum, polished dies and multiple strikes to produce beautifully frosted details rising over mirror-like fields. It will come in its original government packaging and accompanied by a Mint-issued certificate of authenticity.

We expect the demand for this second release in the three-year series to be incredibly high. Don't miss out on this new generation of Platinum Eagles – order yours now!

The second of a three-year arc, this 2019-W One-Ounce Platinum Eagle Liberty Proof is a must-have for any American Eagle collector. Click one to your cart before they’re all gone!