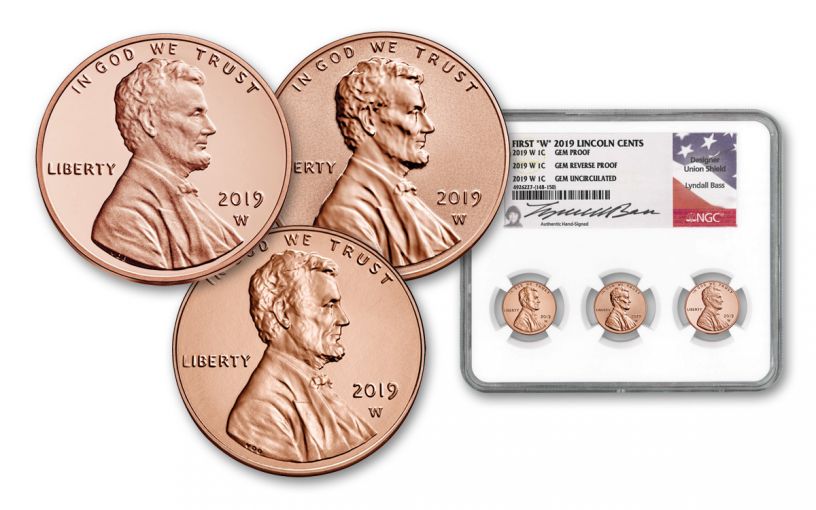 Availability: In Stock
This item will ship within 2 business days.
Item #
363157
Add to Wish List Add to Wish List Wishlist is for registered customers. Please login or create an account to continue. Add to Compare

These pennies were struck at the West Point Mint marking the FIRST time that West Point struck a 1-cent coin. Each coin was packaged separately and shipped with the individual sets. What’s more, these coins were released ONLY in the Mint’s annual sets. They were never available individually from the mint!

Fortunately for you, we’ve been able source the intensely coveted coins and we were able to assemble a limited number of complete 2019-W Lincoln Cent Three-Piece Sets! Each coin has been certified by the Numismatic Guaranty Corporation (NGC), one of the world’s leading third-party grading services. The coins in this amazing set include:

What’s more, each coin has been sealed in an acrylic holder and encapsulated with a label personally signed by American artist Lyndall Bass, the designer of the Union Shield that has appeared on the penny’s reverse since 2010!

First issued in 1909 to mark the centennial anniversary of President Abraham Lincoln’s birth, the Lincoln Cent was an instant success. The Lincoln Penny is now the longest-running design in United States Mint history! Now, struck with a proof, reverse proof and uncirculated finishes, these collector’s keepsakes are available only while supplies last. Don’t miss the chance to own them all. Add all three limited edition West Point Lincoln Cents to your collection today!