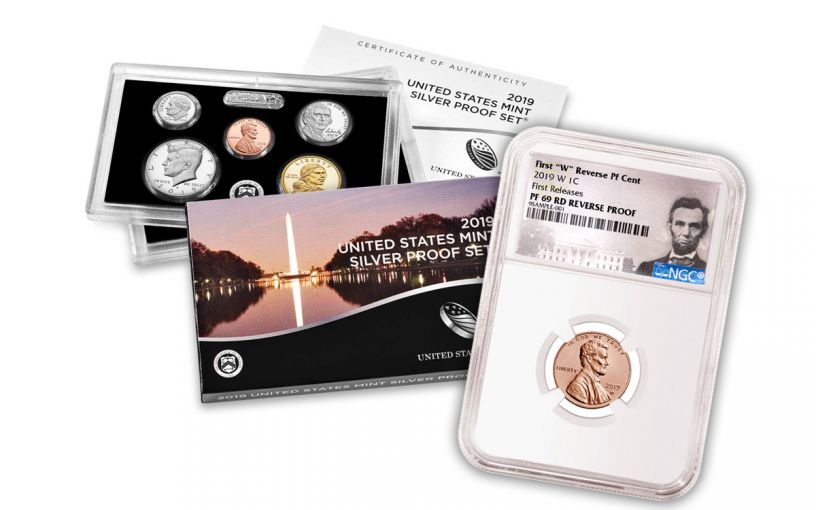 Availability: Out of Stock
This item is currently Out of Stock. Please sign up to be notified if this product becomes available.
Item #
349412
Add to Wish List Add to Wish List Wishlist is for registered customers. Please login or create an account to continue. Add to Compare

2019 Marks the 110th anniversary of the Lincoln Penny. First issued to mark the centennial anniversary of President Abraham Lincoln’s birth it was an instant success. The Lincoln Penny is now the longest-running design in United States Mint history! To pay tribute to the popular little coin, the United States Mint is releasing its 2019 Silver Proof Sets with not one, but TWO ground-breaking Firsts:

To achieve a Reverse Proof effect, the dies and planchets are specially prepared so that multiple strikes result in frosty fields and shimmering details – the complete opposite of their traditional proof finish counterparts – and far more scarce! A good way to tell the difference is to imagine the difference between a photograph and its negative. When held right, a standard proof appears like a black-and-white photograph while a reverse proof takes on the appearance of its negative. The visual effect is remarkable!

The 2019-W Lincoln Cents available in this offer will come graded by the Numismatic Guaranty Corporation (NGC) as being in near-perfect Proof-69 (PF69) condition, a distinction that means your almost-flawless proof will showcase an impressive full strike and indistinguishable imperfections – well above and beyond the quality of the vast majority of coins in the series. In addition, NGC has graded these pennies to be First Releases (FR) coins, a designation that means these coins were received by NGC or an NGC-approved depository within the first 30 days of their release.

Additionally, NGC has certified it as a Red (RD) penny, a designation that really locks down its status as a high-grade coin. Traditionally, a Red designation is applied to high-grade copper pennies that retain at least 95 percent of their original red color on their surfaces. NGC also used the RD designation for modern proof and Mint State pennies as well. The coin will come sonically sealed in an acrylic capsule with an exclusive Lincoln label.

Altogether, you’ll get 11 of this year’s latest circulating coin designs with a stunning proof finish – including the coins listed above plus a 2019-S Lincoln Cent, Jefferson Nickel, and the new Native American Dollar coin celebrating American Indians in the U.S. Space Program. Each set includes:

The ultimate in quality, beauty and value, proofs are double-struck under intense pressures to bring out their intricate details and dazzling luster. That’s why it’s no surprise that these annual sets are a perennial best seller – and a favorite of collectors new and old since they were first issued in 1992!

Every day, Americans exchange billions of dollars in small transactions, buying everything from lunch to newspapers with small coins that range in value from one cent to $1. The transactions are so much a part of people’s routines that they typically take for granted the coins used as mediums of exchange. This is unfortunate given the stunning artistry that goes into American currency, even in the smallest values. This 2019 U.S. Silver Proof Set gives collectors the chance to appreciate this artistry just as it was intended on coins with stunning proof finishes. Don’t wait – secure one or more for your collection now!

If you are looking for a way to appreciate the stunning, often overlooked designs of America’s circulated coinage, don’t miss your chance to own this 2019 U.S. Silver Proof Set. Order yours now!