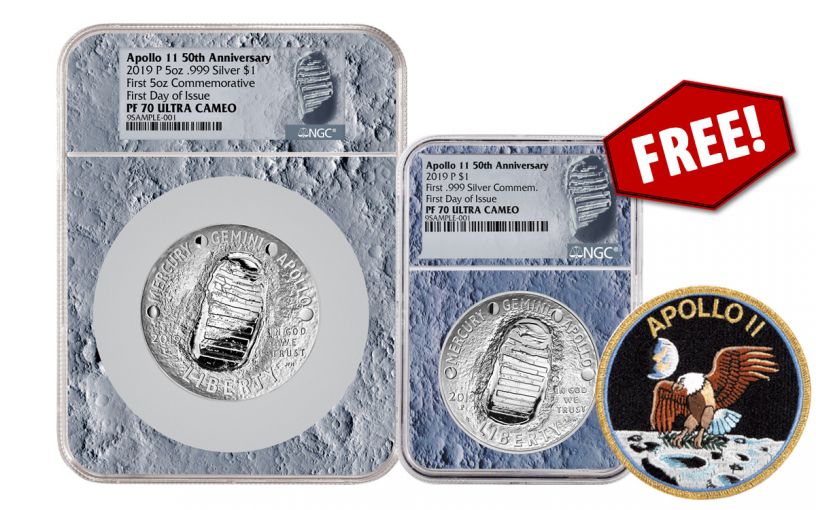 Availability: Out of Stock
This item is currently Out of Stock. Please sign up to be notified if this product becomes available.
Item #
352245
Add to Wish List Add to Wish List Wishlist is for registered customers. Please login or create an account to continue. Add to Compare

In honor of the 50th anniversary of the Apollo 11 mission, the United States Mint has gone where it has never gone before with the release of its FIRST-EVER commemorative proofs struck in 99.9% silver – and now you can get the massive 5-ounce proof in this special offer along with the similarly designed silver dollar as an added bonus!

These special, limited-edition commemorative silver coins are remarkable tributes. Featuring reeded edges and curved surfaces, the obverse of each coin curves inward to show the indented footprint left by astronaut Neil Armstrong along with the names of the space programs that led to such a historic moment: MERCURY, GEMINI and APOLLO separated by phases of the Moon. Flip the coin over and you’ll see the outward curve of an astronaut’s helmet. The design recreates a close-up of the famous photograph snapped by Armstrong of Buzz Aldrin during their epic lunar hike.

The designs are incredibly detailed, and at 3 inches in diameter, the 5-ounce coin is the perfect size to showcase every nuance of the intricate details. Struck in highly-pure 99.9% silver, the coin will come graded by the Numismatic Guaranty Corporation (NGC) as being in flawless Proof-70 (PF70) condition, a distinction that means your perfectly-graded proof will have ZERO imperfections – showing all features and fields exactly as the engraver and mint intended. In addition, NGC has certified your 2019-P Apollo 11 50th Anniversary Five-Ounce Silver Proof to be a First Day of Issue (FDI) coin, meaning it was received by NGC or an NGC-approved depository by the release date or on the business day within 24 hours of the official release date. Your coin will come sonically sealed in an acrylic holder with a unique display core that mimics the lumpy crater-pocked surface of the moon.

The bonus Apollo 11 Silver Dollar features the same images and curved design. Struck in 26.73 grams of 99.9% silver, the coin measures 38.1 mm in diameter and also comes certified and graded by NGC in matching PF70 condition with an FDI certification and encapsulated with the unique moon display core.

With just 100,000 of these historic 2019-P Apollo 11 50th Anniversary Five-Ounce Silver Proofs available and 400,000 of the silver dollars; a quick sell-out is expected. As a one-year-only issue, these curved coins will never be struck by the U.S. Mint again. When they’re gone, they’re gone! Don’t miss this historic release – it’s one small purchase for you and one giant leap for your collection!

Put the first man on the moon into your collection and honor mankind’s crowning achievement with the 2019-P Apollo 11 50th Anniversary Five-Ounce Silver Proof. Order yours now and get the Apollo 11 Silver Dollar as an added bonus!