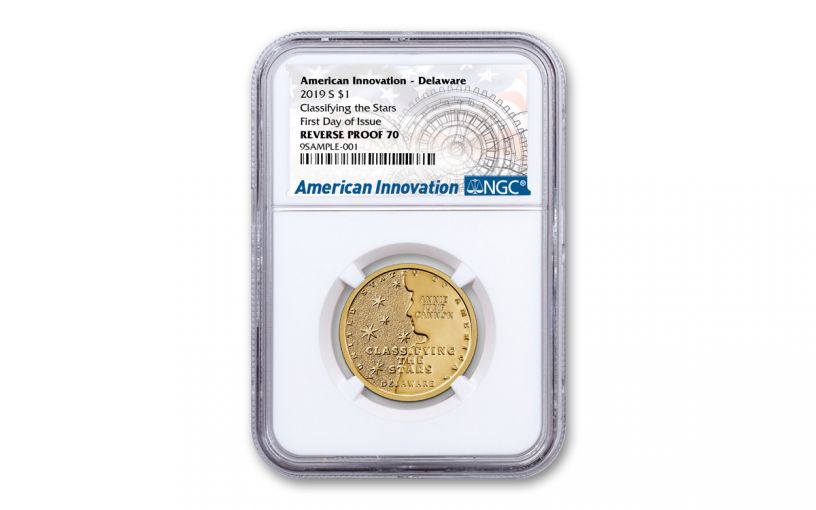 Availability: Out of Stock
This item is currently Out of Stock. Please sign up to be notified if this product becomes available.
Item #
357366
Add to Wish List Add to Wish List Wishlist is for registered customers. Please login or create an account to continue. Add to Compare

Here’s your chance to get the first release from 2019 – the Delaware Dollar featuring astronomer Annie Jump Cannon – in fabulous Reverse Proof condition! Struck with exquisite precision by the San Francisco Mint, this Reverse Proof coin is the opposite of a standard Proof in that it features a frosted background with design elements polished to a mirror-like finish. Each coin available in this offer has been graded by the Numismatic Guaranty Corporation (NGC) as being in flawless Proof-70 (PF70) condition, a distinction that means your perfectly-graded proof will have ZERO imperfections – showing all features and fields exactly as the engraver and mint intended.

In addition, NGC has certified that these Innovation Dollars are First Day of Issue (FDI) coins, a designation that means they were received by NGC or an NGC-approved depository by the release date or on the business day within 24 hours of the official release date. Collectors seek out these coins because they are produced with new dies and considered to have sharper strikes and deeper mirrors than those that are struck later. Also, the population of coins labeled First Day of Issue is only a fraction of the total mintage.