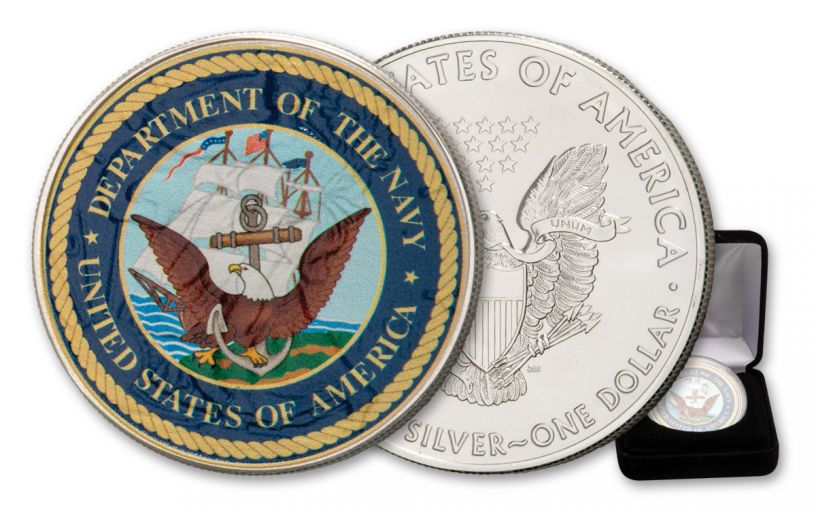 Availability: In Stock
This item will ship within 2 business days.
Item #
358611
Add to Wish List Add to Wish List Wishlist is for registered customers. Please login or create an account to continue. Add to Compare

Officially licensed by their respective U.S. military branch, these coins make the perfect gift for any veteran or military collector. In this offer you can secure a colorized Tribute Silver Eagle that honors the U.S. Navy. Established as the Continental Navy, the United States Navy traces its roots back to the Revolutionary War when Founding Father and future President John Adams was able to fend off stiff opposition and rally support for a fleet that could disrupt British maritime operations. Today those few merchant ships started what has grown to become the largest and most skilled navy in the world.

SPECIAL LASER COLORIZATION TECHNIQUE – This Tribute Coin starts as an American Silver Eagle – one of the world’s most popular silver bullion coins – and becomes a colorful tribute to the United States Navy through a unique laser colorization process that applies the U.S. Navy emblem to the coin’s obverse.

STRUCK IN HIGHLY-PURE SILVER – Each Tribute Silver Dollar is struck in a full ounce of highly-pure 99.93% fine silver and measure 40.3 mm in diameter.

The unofficial motto of the United States Navy is “Semper Fortis” – Latin for “Always Strong.” Keep the motto close to your heart by adding this special U.S. Armed Forces Navy Colorized Silver Eagle to your collection.