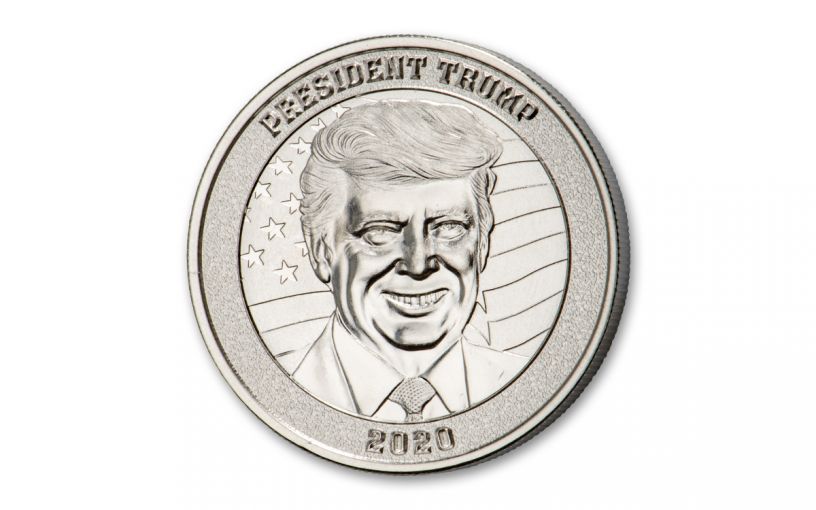 Availability: Out of Stock
This item is currently Out of Stock. Please sign up to be notified if this product becomes available.
Item #
359877
Add to Wish List Add to Wish List Wishlist is for registered customers. Please login or create an account to continue. Add to Compare

Ever since he announced his candidacy for President of the United States, Donald Trump has railed against hoaxes, witch hunts and Fake News. No matter which side of the political aisle you fall, there’s nothing phony about this impressive silver medallion that marks an historic moment in United States history – the impeachment trial of President Trump and his subsequent acquittal.

Released just in time for the 2020 election season, this politically charged keepsake was struck in a full ounce of highly pure 99.9% silver. It features a smiling President Trump on the obverse with the American flag in the background. On the reverse is a Bald Eagle soaring from left to right. Around the rim of the medal are the engravings “45th PRESIDENT OF THE UNITED STATES,” “ACQUITTED” and “EXONERATED” while just above the eagle is the medal’s weight and silver purity.

Love him or loathe him, there’s no doubt that President Trump’s time in office will go down as one of the most memorable in United States history. While serving as the nation’s 45th President, Trump has successfully navigated through one crisis after another, his unfiltered tweets chronicling the events of his presidency in a way that has buoyed his supporters and infuriated his opponents.

With the renewed interest in Presidential memorabilia, these historic Donald Trump Acquittal Medals are must-have collectibles – especially now as the 2020 Presidential Election heats up. But with only 10,000 available for the entire world, you’ll need to order now to guarantee that you don’t miss out.

Commemorate the acquittal of President Donald Trump from all impeachment charges with this blazing medal struck gleaming silver. Order yours today!