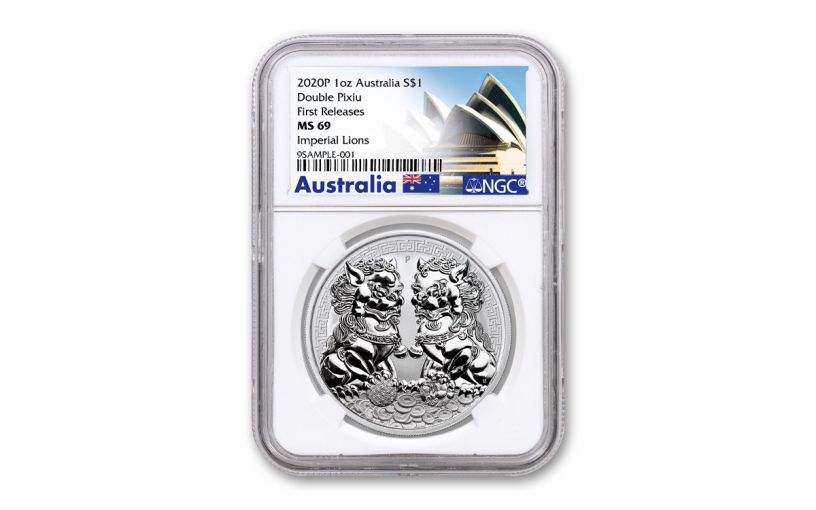 Availability: Out of Stock
This item is currently Out of Stock. Please sign up to be notified if this product becomes available.
Item #
363911
Add to Wish List Add to Wish List Wishlist is for registered customers. Please login or create an account to continue. Add to Compare

Truck in a full ounce of 99.99% pure silver, this legal-tender coin depicts a Pixiu pair sitting upon a mound of ancient Chinese coins. One grasps a ball and the other a Pixiu cub. According to Chinese mythology, the Pixiu possesses mystical powers that allow it to draw wealth from any and all directions. The Pixiu is also a common symbol found in ancient Chinese art and architecture where it is traditionally displayed in pairs. Perhaps the most famous pair is an imperial duo that can be seen in Beijing, China where they stand at the entrance to the Hall of Supreme Harmony in The Forbidden City.

Each 2020 Australia One-Ounce Silver Double Pixiu coin available here has been graded by the Numismatic Guaranty Corporation (NGC) as being in near-perfect Mint State-69 (MS69) condition, a distinction that means these almost-flawless coins showcase impressive full strikes and indistinguishable imperfections — well above and beyond the quality of the vast majority of coins in the series. Plus, each coin also includes a security feature in the form of a micro-laser engraved letter within the design detectable only under a magnifying glass.

In addition, NGC has certified that these coins are First Releases (FR), a designation that means they were received by NGC or an NGC-approved depository within the first 30 days of their release. Collectors seek out these coins because they are produced with new dies and considered to have sharper strikes and deeper mirrors than those that are struck later.

Just 50,000 of these coins will be struck for worldwide release and they are already sold out at the mint. Make sure good fortune is on your side and click one to your cart right now!

A symbol of good fortune, the 2020 Australia One-Ounce Silver Double Pixiu is ready to spread its blessings of wealth upon your collection. Order yours today!