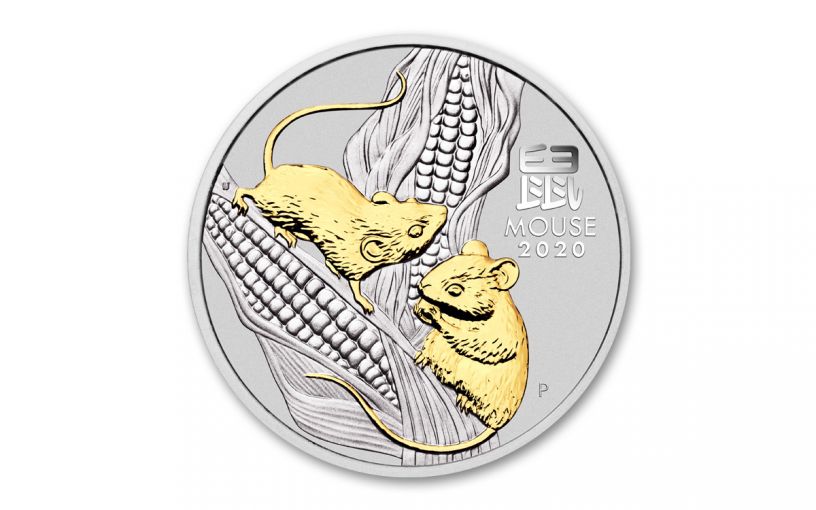 Availability: In Stock
This item will ship within 2 business days.
Item #
356125
Review this product
Add to Wish List Add to Wish List Wishlist is for registered customers. Please login or create an account to continue. Add to Compare
Product Description

The One Kind of Mouse You WANT to Find in Your Home!

Back in the good old days, the sight of a mouse caused some women to panic and stand on chairs while their husbands futilely chased the little varmints across the floor with a broom. But the only scary thing about the mice we have available in this offer is the thought of missing out on one of these gleaming coins – the first release in Australia’s Lunar Series III program that celebrates animals in the Chinese zodiac.

Struck in a full ounce of 99.99% pure silver, the 2020 Australia Lunar Year of the Mouse Silver Coin depicts a pair of mice foraging on husks of corn along with the Chinese symbol for “mouse.” The little critters look absolutely adorable as they happily chew on kernels of field corn. In fact, if those housewives of yore saw THESE particular little guys, they’d probably want to give ’em a saucer of milk instead of a smack with a broom! What makes then even MORE delightful is that they have been exquisitely gilded in 24-karat gold from the ends of their tails to the tips of their ears.

These coins were expertly crafted by the artisans at Australia’s famed Perth Mint and come in Brilliant Uncirculated (BU) condition. In addition, each will come in its original government packaging from the mint consisting of a classic display case with a clear lid inside an illustrated shipper sleeve. You will also receive a numbered Certificate of Authenticity. No more than 23,500 of these inaugural 2020 Lunar Series III One-Ounce Silver Year of the Mouse Gilded BU coins will ever be issued so don’t be like a quiet church mouse; make your voice be heard and reserve one to your cart today!

Australia’s foray into the animals of the Chinese Zodiac continues with a third series – kicked off by this One-Ounce Silver Lunar Mouse Gilded Coin. Reserve yours now and beat the rush!