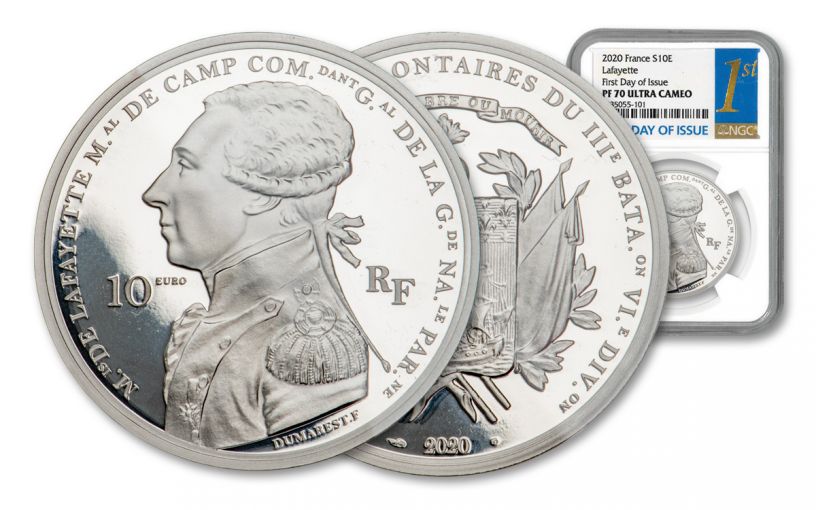 Availability: Out of Stock
This item is currently Out of Stock. Please sign up to be notified if this product becomes available.
Item #
365981
Add to Wish List Add to Wish List Wishlist is for registered customers. Please login or create an account to continue. Add to Compare

The Monnaie de Paris — the famed Paris Mint — has been striking coins and medals for more than 1,150 years. This includes special medals struck during the American Revolution. Now, leading up to America’s 250th birthday in 2026, the Paris Mint is striking a new series recreating designs from those historic medals

Struck in 22.2 grams of highly pure 90% fine silver, this piece takes its design directly from the historic medal struck by the Paris Mint in 1789 to commemorate the arrival of Major General Lafayette in America. The only changes to this classic design are the addition of the 10 Euro denomination and the letters RF (Republic of France) on the obverse, and the new 2020 date on the reverse.

Minted in Proof condition, it features frosty designs and mirrored fields. In fact, each coin available in this offer has been graded by the Numismatic Guaranty Corporation (NGC) as being in flawless Proof-70 Ultra Cameo (PF70UC) condition, a distinction that means these perfectly-graded proofs have ZERO imperfection — showing all features and fields exactly as the engraver and mint intended. What’s more, NGC has also certified that these proofs are First Day of Issue (FDI) coins, meaning that they were received by NGC or an NGC-approved depository by the release date or on the business day within 24 hours of the official release date.

A respected French military leader, the Marquis de Lafayette, sailed to the New World in 1777 to join the Continental Army. He served as General George Washington’s second-in-command for two years before returning to France to serve as an advocate for America at the French court. Today, more than 50 American cities, counties, streets and barks bear his name. For his brave exploits, Lafayette has been dubbed “The Hero of the Two Worlds.”

Only 2,500 of these 2020 France 22.2-Gram Silver Lafayette Proof have been authorized for worldwide release. Lafayette arrived in America to provide assistance to the fledgling nation in its fight for independence. Now he has returned on this impressive limited-edition coin.

With so few coins available, you’ll want to reserve yours now before they’re all gone. Click one to your cart now to avoid disappointment later.