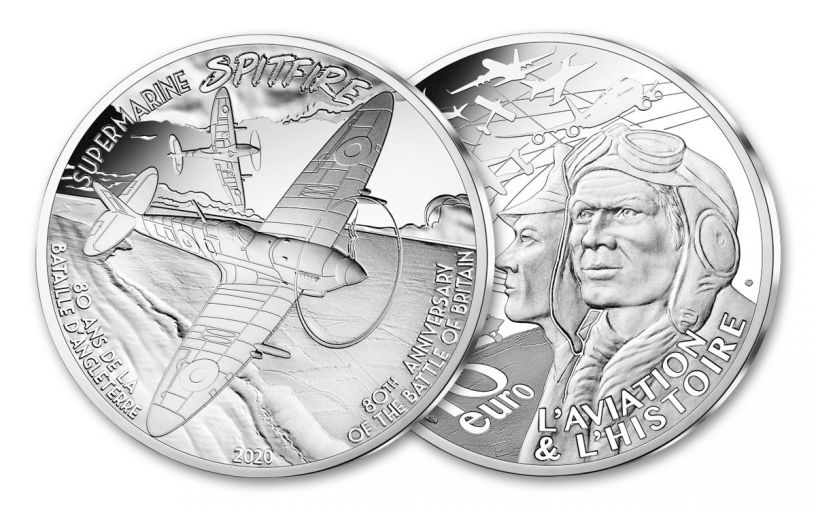 Availability: In Stock
This item will ship within 2 business days.
Item #
363261
Add to Wish List Add to Wish List Wishlist is for registered customers. Please login or create an account to continue. Add to Compare

The Heroes of the Battle of Britain

When it first roared into the sky on March 5, 1936, the Supermarine Spitfire was instantly recognizable for its elliptical wings and thin cross sections. The mainstay of the Royal Air Force’s heroic efforts during the decisive Battle of Britain, the sleek and speedy Spitfire became an iconic aircraft during World War II. And that legendary fighter plane now it flies again as the theme of a spectacular silver proof.

An Exciting Tribute to the Battle of Britain

Struck by Monnaie de Paris (the Paris Mint) in 22.2 grams of 90% silver, this legal-tender 10 Euros coin celebrates the Spitfire and the 80th anniversary of the Battle of Britain, during which the Royal Air Force scored an important victory over German Luftwaffe in 1940. A pair of Spitfires are screaming through the skies past the English coast along with a legend that reads “80 ANNIVERSARY OF THE BATTLE OF BRITAIN” to the lower right and “SUPERMARINE SPIFIRE” to the upper left. The coin’s obverse depicts a pair of pilots – one civilian and one military – along with various aircraft throughout history and a legend in French that reads “AVIATION & HISTORY.”

Each coin available here was expertly crafted by the mint from hand-selected planchets, polished dies and multiple strikes to produce beautifully frosted details rising over mirror-like fields. In addition, each will come sealed in a clear acrylic holder and beautifully displayed in a mint-issued presentation case and accompanied by a Certificate of Authenticity.

Just 3,000 of these exciting coins will be struck for worldwide release. With World War II-themed cons always popular combined with the limited edition, we expect these coins to fly out of here in no time. Make sure you pilot one of these beauties into your collection today!

Pay tribute to the Heroes of the Battle of Britain with this 2020 France Silver Supermarine Spitfire that commemorates the 80th anniversary of the epic World War II battle. Add it to your cart and let it soar into your collection.