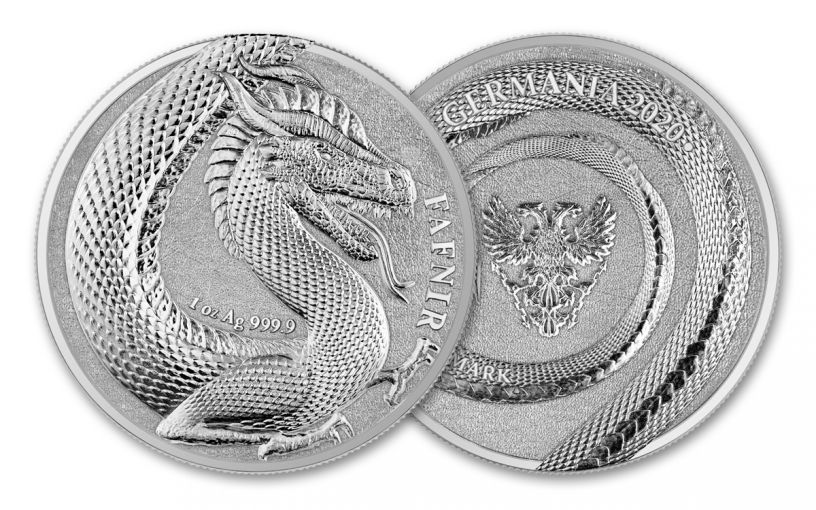 Availability: In Stock
This item will ship within 2 business days.
Item #
366682
Add to Wish List Add to Wish List Wishlist is for registered customers. Please login or create an account to continue. Add to Compare

Dragons are often portrayed as villains and that’s no different in Norse mythology where the great dragon Fafnir checks all the boxes for the archetypical dragon profile we’ve seen in books and films since the time we were children. A murderer? Check. Greedy? Check. Guards a hoard of gold? Check. Slayed by a brave hero? Check and check.

But Fafnir lives again thanks to the Germania Mint as the first release in the Germania Mint Beasts Series. Struck in a full ounce of 99.99% pure silver, this stunning medal depicts the famous beast from Viking lore as a terrifying serpent-like creature. Fafnir’s horrible visage fills the medal’s obverse while on the reverse you’ll see the Germania Mint’s Coat of Arms encircled by coiling rings of the beast’s tail. The designs were crafted so that if one places two medals side by side, one obverse side up and one reverse side up, they form the whole of the dragon from head to tail.

According to Norse folklore, Fafnir had once been a man. But his fortunes changed after he killed his father in order to receive the gold that the All-Father God Odin had promised his father. Odin agreed to give the gold to Fafnir instead, but only after he put a curse on it that caused the greedy Fafnir to change into a dragon and forever guard his treasure. The evil dragon was finally slain by the young hero Sigurd, who hid in camouflaged hole and stabbed Fafnir as he passed over it.

Each piece available here comes in original Gem Brilliant Uncirculated (BU) condition, meaning that these medals are the result of superb strikes that place them firmly among the elite of the run. These medals also come in special capsules that were designed in the shape of a lens, thus allowing the Fafnir designs to stand out even more!

Just 25,000 of these epic silver medals will be struck for worldwide release and each comes with a Certificate of Authenticity. Don’t miss out; grab one of these Legend of Fafnir medals now before they vanish into the mists of ancient folklore.

The Germania Beasts Series begins with an epic dragon tale. Click it to your cart today!