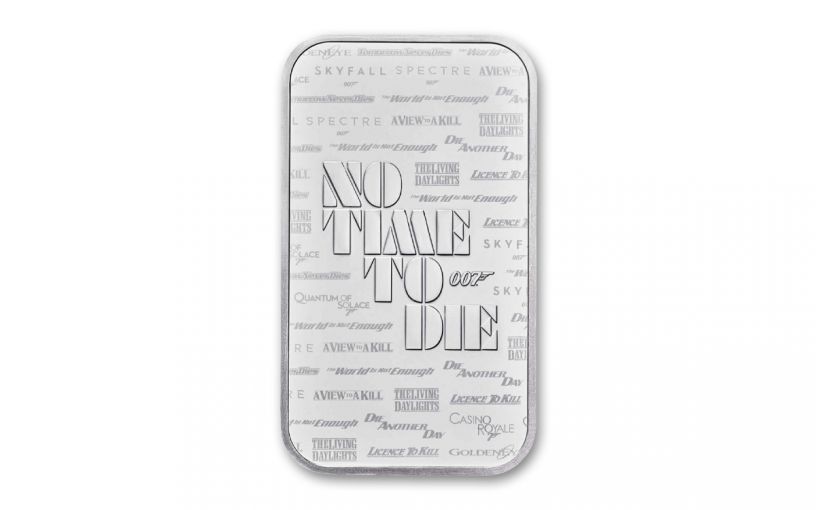 Availability: Out of Stock
This item is currently Out of Stock. Please sign up to be notified if this product becomes available.
Item #
362400

Celebrate the Legacy of the James Bond Films

Bond, James Bond. Every man wants to be him, every woman wants to be with him. He is without a doubt a doubt the sexiest, most suave secret agent ever to strap a Walther PPK semi-automatic pistol inside his dinner jacket. Of course, as we all know, James Bond isn’t real; he’s just the fictional creation of author Ian Fleming and brought to life on screen by such stars as Sean Connery, Roger Moore and, most recently, by Daniel Craig.

Timely No Time To Die Design

With 2021 marking the release of No Time To Die, the 25th installment in the James Bond film series produced by Eon Productions, there’s no time like the present to add this gleaming silver bar to your collection. Struck in a full ounce of highly pure 99.99% fine silver by Great Britain’s Royal Mint, this glittering piece is an essential addition to anyone’s arsenal of James Bong-related memorabilia — as well as being a fantastic opportunity to stock up on silver!

This Brilliant Uncirculated (BU) bar features the No Time To Die typeface superimposed over smaller engravings of the other titles in the series. Goldfinger, Thunderball, The Man With The Golden Gun, The Living Daylights…. They’re all there! The bar’s obverse features the famous 007 pistol logo and the Royal Mint logo along with the bar’s weight and silver purity

Just in time for 2021’s No Time to Die, you can feel like part of the James Bond films with this Great Britain One-Ounce Silver James Bond Bar. Make it part of your coin arsenal today!