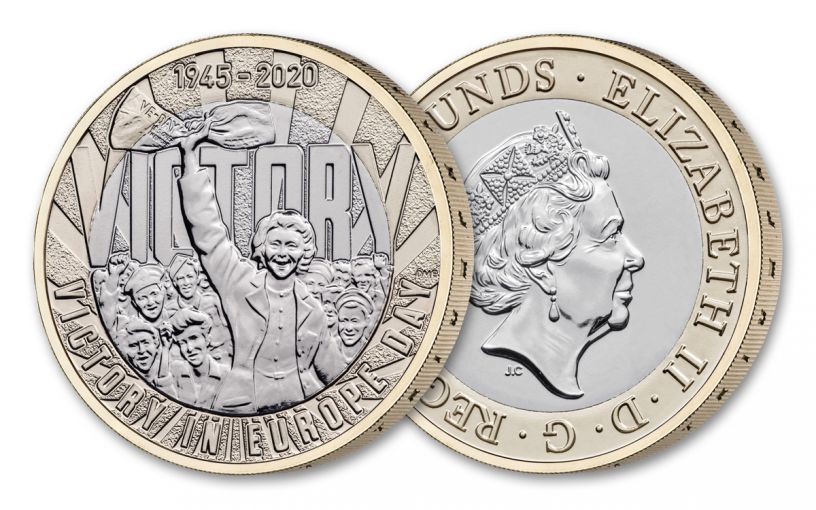 Availability: In Stock
This item will ship within 2 business days.
Item #
363612

May 8, 1945 marked the end of World War II in Europe. It was proclaimed Victory in Europe Day — VE-Day. And to celebrate the 75th anniversary of that glorious moment in time, Great’s Britain’s prestigious Royal Mint released a sentimental series of commemorative coins that capture the joyous celebrations that spread across the world following the surrender of Nazi Germany, thus bringing an end to the war in the European Theater.

Struck with an inner ring of Copper-Nickel (CuNi) and an outer ring of Nickel-Brass, this 12-gram legal-tender £2 coin features a detailed image of Londoners celebrating the news. At 3 pm on VE Day, British Prime Minister Winston Churchill made a national radio broadcast announcing the welcome news that the war had ended in Europe. Thousands of revelers greeted Churchill later when he appeared on the balcony of the Ministry of Health building in central London where he gave an impromptu speech. Ever the shrewd politician, Churchill confirmed with the Ministry of Food that there was enough beer in the capital before he announced a national holiday!

Each 2020 Great Britain 75th anniversary of VE Day Coin available here comes in original Brilliant Uncirculated (BU) condition with razor-sharp details that are as crisp and fresh as the day they left the mint. Plus, these coins will arrive in original government packaging that consists of a multi-panel education folder that brings the events of VE Day to life.

Whether you lived through the days of World War II, studied it in school or are a student of history, this poignant coin will make the perfect addition to your collection. Celebrate a time when the nations of the world were united in peace by ordering your coin today!

Join the celebration with the 2020 Great Britain 75th anniversary of VE Day Coin. Order yours now!