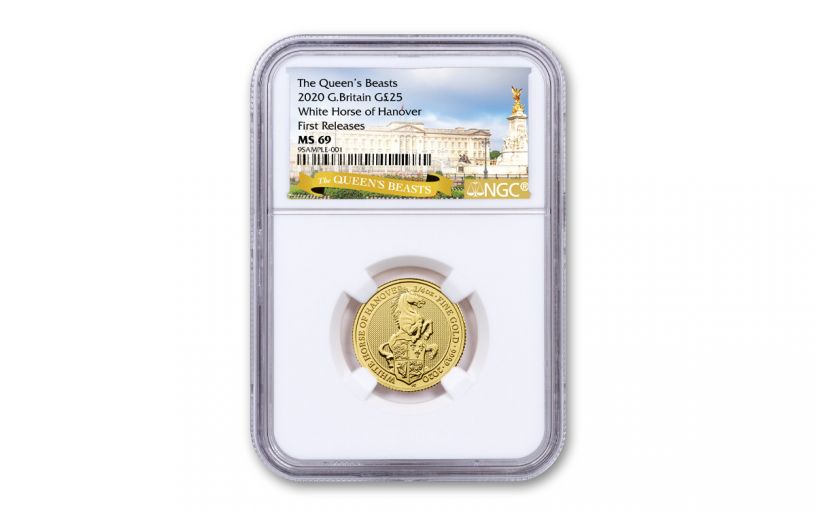 Availability: Out of Stock
This item is currently Out of Stock. Please sign up to be notified if this product becomes available.
Item #
361746

The ninth coin in the popular bullion version of the series, this White Horse of Hanover coin bears a legal-tender denomination of £25 (twenty-five pounds) and is struck in a quarter ounce of 99.99% pure gold. The symbolic coin depicts the majestic equine triumphantly rearing over a shield as if in a full gallop. The powerful stallion is depicted with the Royal Arms of George I, which includes three quarters that represent his sovereignty as King of Great Britain, France and Ireland while the fourth has the arms of Hanover.

Each 2020 Great Britain Quarter-Ounce Gold Queen’s Beasts White Horse of Hanover Coin available in this offer has been graded by the Numismatic Guaranty Corporation (NGC) as being in near-perfect Mint State-69 (MS69) condition, a distinction that means your almost-flawless coin will showcase an impressive full strike and indistinguishable imperfections – well above and beyond the quality of the vast majority of coins in the series. In addition, NGC has also certified that it is a First Releases (FR) coin, a designation that means your coin was received by NGC or an NGC-approved depository within the first 30 days of the coin’s release. It will also come sonically sealed in an acrylic holder with an exclusive Queen’s Beasts label.

STRUCK IN HIGHLY PURE GOLD – Each of these Queen’s Beasts White Horse of Hanover Coins are struck in a quarter ounce of 99.99% pure gold and measure 22 mm in diameter.

KEY FIRST RELEASES CERTIFICATION – NGC has also certified that this is a First Releases (FR) coin, meaning that it was among the first struck by the mint and was verified within the first 30 days of issue.