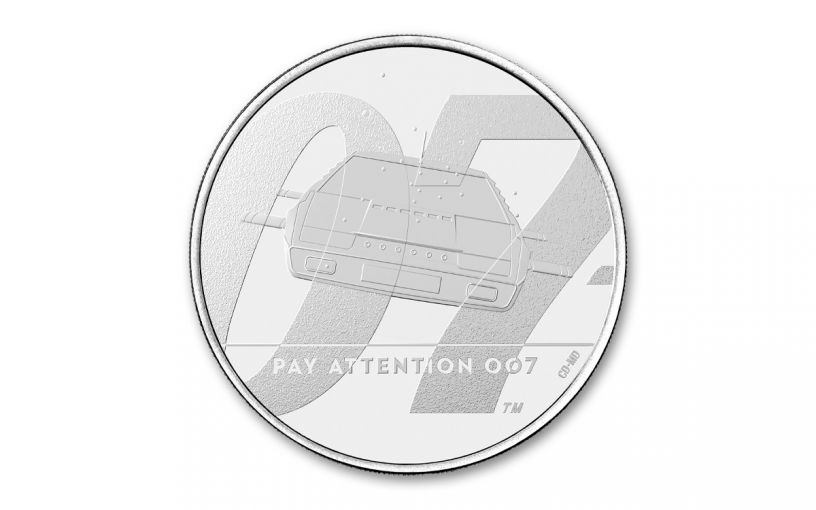 Availability: Out of Stock
This item is currently Out of Stock. Please sign up to be notified if this product becomes available.
Item #
366187
Add to Wish List Add to Wish List Wishlist is for registered customers. Please login or create an account to continue. Add to Compare

Give This James Bond Coin Your Undivided Attention

At some point in every James Bond film, the suave super spy checks in at headquarters. After being briefed on his mission, Bond is ushered off to meet “Q”,” the weapons master for the MI6 spy branch. Always exasperated by Bond’s seemingly flippant attitude, the long-suffering gadget guru will attempt to keep his star pupil on tracking with the admonition, “Now pay attention, 007!” It’s all part of the magic that has made the James Bond films ingrained in our memories. And now you can give Q his due thanks to this coin from Great Britain’s Royal Mint that’s literally dripping with the legacy of the Bond series.

Struck in 28.28 grams of gleaming copper-nickel (CuNi), this legal-tender £5 (five pounds) coin pays tribute to Bond and his gadgets by highlighting one of his most spectacular gadgets ever — the “Wet Nellie” submarine car that appeared in 1977’s The Spy Who Loved Me. Constructed in the shape of a Lotus Esprit S1 sports car, Wet Nellie was piloted by Bond and KGB agent Anya Amasova, portrayed respectively by Roger Moore and Barbara Bach, as they escaped from an attack helicopter sent to kill them by Karl Stromberg, a web-fingered megalomaniac bent on wiping out all life on the world’s surface by triggering World War III.

The classic car is seen cruising below the Mediterranean Sea as it escapes from Stromberg’s henchmen. To give the design a feeling that the car is underwater several telltale bubbles were been added as well as positioning the car at a slight angle to complete the effect. The tagline “PAY ATTENTION 007” appears below the car. The design also features an “07” from Bond’s 007 agent number and when placed side by side with other coins in the series will complete the code.

Your 2020 Great Britain James Bond “Pay Attention” Coin will come in gleaming Brilliant Uncirculated (BU) condition with razor-sharp details, as fresh and crisp as the day it left the mint. Plus, each coin available in this offer will come presented in a themed and illustrated card that folds open to reveal a storybook about James Bond. The folder is also branded with the iconic 007 “gun barrel” logo that’s sure to be familiar to anyone who has seen the opening credits of a James Bond film.

The time to secure one of these coins is now. So, give this James Bond “Pay Attention” coin your undivided attention and steer it into your collection today!

Feel like an international super spy and secure one of these 2020 Great Britain CuNi James Bond “Pay Attention” Coins. No gadgets necessary; simply click one to your cart today!