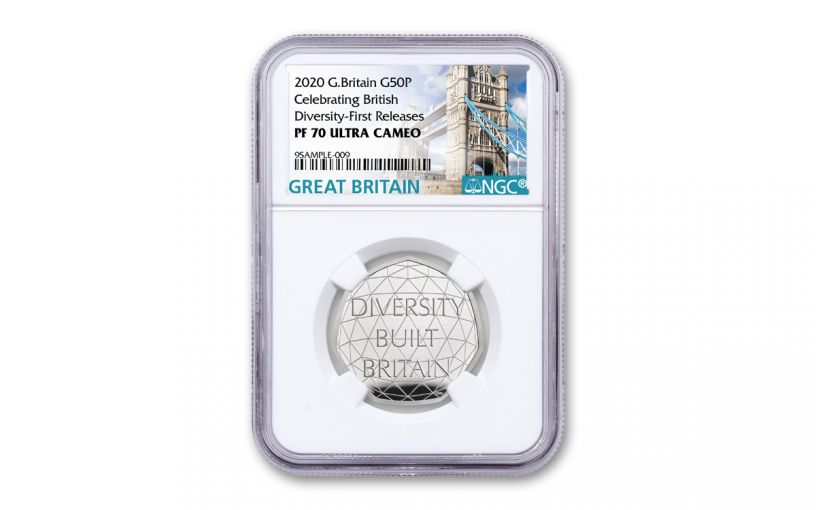 Availability: In Stock
This item will ship within 2 business days.
Item #
368338
Add to Wish List Add to Wish List Wishlist is for registered customers. Please login or create an account to continue. Add to Compare

Recognize the Value of Diversity

If 2020 has taught anything it’s that diversity is here and it’s here to stay. But recognizing diversity isn’t really a new concept. People of all creeds, colors and ethnicities have made valuable contributions to world history. To celebrate Great Britain’s long history of diversity, The Royal Mint has struck a unique seven-sided coin that makes no bones about how important diversity is to the nation and its people.

Struck in eight grams of 92.5% Sterling silver, this 50-Pence legal tender coin features a bold inscription that reads “DIVERSITY BUILT BRITAIN” within a background of interconnected triangles. Designed by Dominique Evans, the lines that make up the triangles are symbolic of a network, with each part just as important as the next in uniting the whole composition — just as human society is interconnected. It’s a fitting motif as throughout the 1,100 years that British coins have served as a narrative of the nation’s history, the contribution of ethnic minority communities has been an important ingredient to that story.

Each 2020 Great Britain Eight-Gram Silver British Diversity Proof available here has been graded by the Numismatic Guaranty Corporation (NGC) as being in flawless Proof-70 Ultra Cameo (PF70UC), a distinction that means these perfectly-graded proofs have ZERO imperfections — showing all features and fields exactly as the engraver and mint intended. In addition, NGC has certified that these proofs are First Releases (FR) coins, a designation that means they were received by NGC or an NGC-approved depository within the first 30 days of their release. Each will come sonically sealed in an acrylic holder with a Great Britain label. These coins will also be accompanied by their original government packaging that consists of a custom presentation case and a mint-issued Certificate of Authenticity.

Celebrate diversity today by securing one of these fascinating coins.

Build up your collection with a coin that celebrates how diversity helps build nations with this 2020 Great Britain Eight-Gram Silver British Diversity Proof. Click it your cart today!