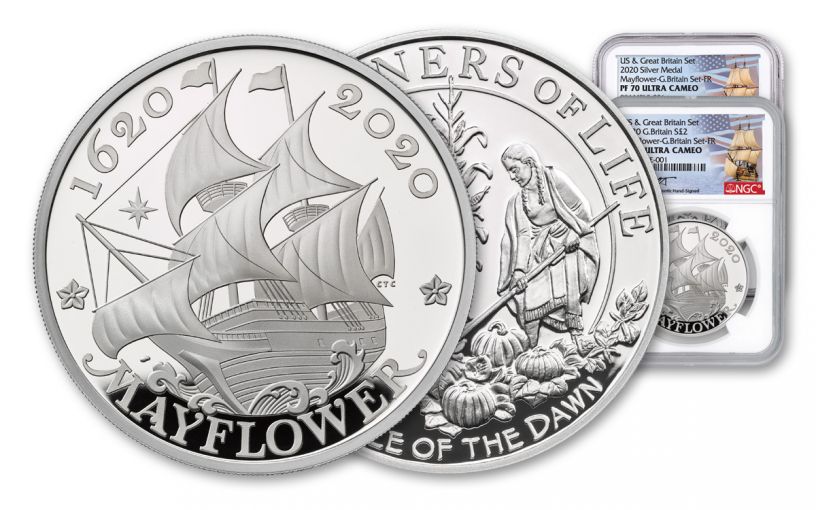 Availability: Call-In Only
This item is only available on a Call-In basis. Please call 1-800-510-6468 to speak to a representative.
Item #
368762
Add to Wish List Add to Wish List Wishlist is for registered customers. Please login or create an account to continue. Add to Compare
Recommended Products
Product Description

For the first time in history, the United States Mint and Great Britain’s Royal Mint have come together to jointly release sets of gold and silver products. These sets commemorate the 400th anniversary of the Mayflower’s historic voyage from Plymouth, England to the New World.

From England to the New World

The reverse of the Royal Mint coin depicts the Mayflower at full sail, with mayflower blossoms to either side. The obverse depicts Queen Elizabeth II. The U.S. Mint coin pairs a reverse featuring an image of a Native American Wampanoag couple planting crops with an obverse showing a newly arrived Pilgrim couple with the Mayflower in the background. Both pieces were crafted by U.S. Mint designer Chris Costello. This marks the first time ever that The Royal Mint has issued a coin designed by a U.S. Mint designer!

Both pieces will arrive graded by the Numismatic Guaranty Corporation (NGC) as being in perfect Proof-70 Ultra Cameo (PF70UC) condition, a distinction that means these perfectly-graded proofs have ZERO imperfections — showing all features and fields exactly as the engraver and mint intended. In addition, NGC has also certified that these proofs are First Releases (FR), a designation that means they were received by NGC or an NGC-approved depository within the first 30 days of their release. Collectors seek out these releases like this because they are produced with new dies and considered to have sharper strikes and deeper mirrors than those that are struck later.

What’s more, each piece has been sonically sealed in an acrylic holder and encapsulated with an exclusive label personally signed by U.S. Mint designer Chris Costello. Since 2010, Costello has worked with the U.S. Mint as an Artistic Infusion Program artist and is credited with more than 20 coin and medal designs. In 2019, he received a Coin of the Year Award for best silver coin and continues to contribute innovative designs for America’s coin and medal programs.

This set is incredibly limited, with just 14,200 sets struck. Of that limited mintage, just 5,000 are being issued by The Royal Mint. Even fewer are available certified by NGC as PF70UC and First Releases with hand-signed labels. Each set will also come beautifully housed in a deluxe presentation box featuring British and American flags.