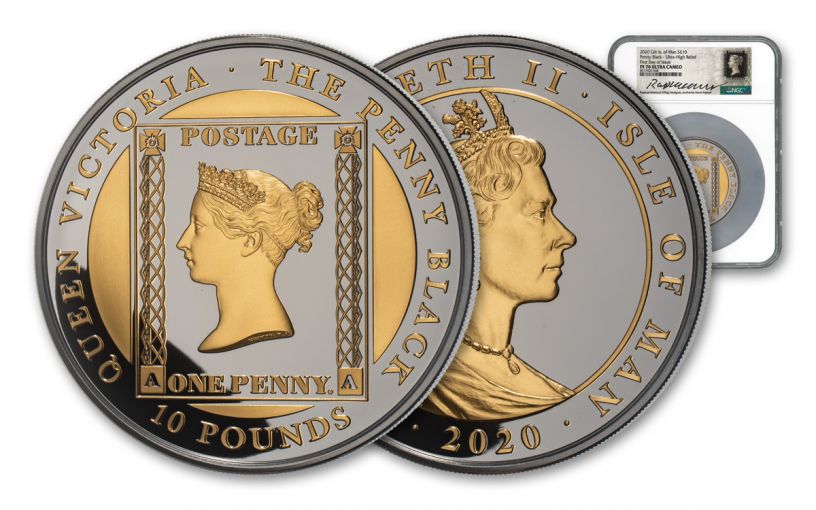 Availability: Call-In Only
This item is only available on a Call-In basis. Please call 1-800-510-6468 to speak to a representative.
Item #
364635
Add to Wish List Add to Wish List Wishlist is for registered customers. Please login or create an account to continue. Add to Compare

After 30 Years, the Isle of Man’s Penny Black Coins Return for a New Generation

Great Britain’s Penny Black stamp was the first postage stamp ever issued in the world. The landmark one-penny stamp was created by Sir Roland Hill in 1840 and featured a profile of Queen Victoria including her delicate crown and a fine filigree on the borders. To commemorate the stamp’s 180th anniversary in 2020, the Isle of Man released special commemorative coins that not only pay tribute to the important milestone in philatelic history, but also mark the 30th anniversary of one of the world’s most popular coin series.

Among those coins is this fabulous legal-tender £10 proof coin struck in five ounces of highly pure 99.9% fine silver. It features the same mouthwatering design of the original Penny Black coins issued by the Isle of Man to worldwide acclaim 30 years ago. The coin has also been gilded in gleaming gold, which, combined with its Ultra High Relief details and black Ruthenium finish, makes this new release a worthy successor to the celebrated Penny Black coins that took the world by storm in the early 1990s.

The original 1990 Penny Black coin commemorated the 150th anniversary of the world’s first postage stamp. It showed a design of the 1840 Penny Black stamp complete with its portrait of a young Queen Victoria, who was just 21 at the time and was in only the third year of her reign. The coin was met with immediate and complete adulation, winning not one but THREE Coin of the Year Awards: Best Crown, Most Innovative Coin and the top award The Coin of the Year.

The Coin of the Year (COTY) awards are considered by many numismatists to be the “Academy Awards” for coins. The annual competition recognizes outstanding coins designs from hundreds of coins submitted from around the world. The judging is done by a panel of coin experts from mints, publications, museums, major numismatic organizations and prominent collectors. Even a nomination for this award is an honor and something that gets serious attention of collectors.

Your 2020 Isle of Man Five-Ounce Silver Penny Black Ultra High Relief Proof has been graded by the Numismatic Guaranty Corporation (NGC) as being in flawless Proof-70 Ultra Cameo (PF70UC) condition, a distinction that means your perfectly-graded proof will have ZERO imperfections — showing all features and fields exactly as the engraver and mint intended. In addition, NGC has certified that this proof is a First Day of Issue (FDI) coin, meaning it was received by NGC or an NGC-approved depository by the release date or on the business day within 24 hours of the official release date. As an added feature, each coin available in this offer will be sonically sealed in an acrylic holder with a custom Penny Black label personally signed by British sculptor Raphael Maklouf, the designer of the effigy of Queen Elizabeth II that appears on the coin’s obverse!

These fabulous coins were struck by the prestigious Tower Mint, one of the United Kingdom’s leading private mints and last remaining mint in London. Founded in 1976 by acclaimed sculptor Raphael Maklouf, who is famous for his effigy of Queen Elizabeth II that was featured on many British Commonwealth coins from 1985-1997, the Tower Mint is the official striking mint for all the Isle of Man’s circulating and commemorative coins.

Just 999 of these exquisite proofs will be minted for worldwide release. So, don’t wait; get one of the first coins struck in the heavily anticipated 2020 Isle of Man Five-Ounce Silver Penny Black Ultra High Relief Proof release while they’re still available!

After 30 years, the Isle of Man’s Penny Black Coin returns for a whole new generation. If you were fortunate to have secured coins from the original release, this is an opportunity that you can’t pass up. It’s also a wonderful award-winning design to add to any collection! Secure yours now!