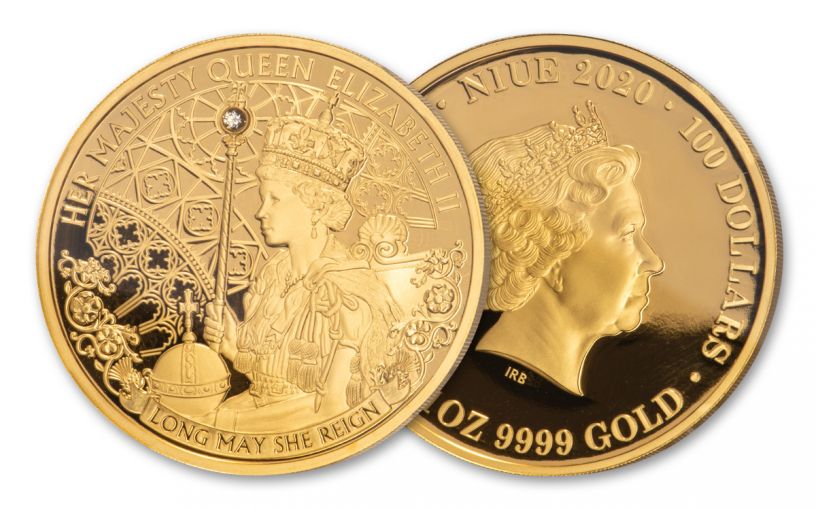 Availability: Call-In Only
This item is only available on a Call-In basis. Please call 1-800-510-6468 to speak to a representative.
Item #
366570
Add to Wish List Add to Wish List Wishlist is for registered customers. Please login or create an account to continue. Add to Compare

Struck in a full ounce of 99.99% pure gold, this fabulous coin depicts Her Majesty as she appeared during her coronation on June 2, 1953 at London’s Westminster Abbey. Then 27, the young queen had become her nation’s monarch just a year earlier upon the sudden death of her father King George VI. The magnificent design on this coin perfectly bookends The Queen’s life and service to Great Britain and the Commonwealth. It depicts her wearing St Edward’s Crown sitting upon a throne during her coronation with her Sovereign Scepter and Orb. And if you look closely, you can see that a genuine diamond has been set into the tip of her scepter! The intricate design also features the inscriptions “HER MAJESTY QUEEN ELIZABETH II” and “LONG MAY SHE REIGN.” The coin’s obverse features the traditional Ian-Rank Broadley effigy that currently appears on all British coinage.

Released by Australia’s world-renowned Perth Mint on behalf of Niue, a small island nation in the South Pacific Ocean, this legal-tender $1 coin also comes in gorgeous proof condition. That means it was expertly crafted by the mint from hand-selected planchets, polished dies and multiple strikes to produce beautifully frosted details rising over mirror-like fields! Each will also come beautifully displayed in its original; government packaging that consists of a custom presentation case and accompanied by a mint-issued Certificate of Authenticity.

One would think that a coin that pays tribute to one of the world’s most prominent people would have a high mintage. But that’s not the case for this 2020 Niue One-Ounce Gold Queen Elizabeth II Long May She Reign Proof, which has a mintage of only 150. Such a small edition limit means these coins will not be around for long. Don’t wait, add one of these gorgeous proofs to your collection today!