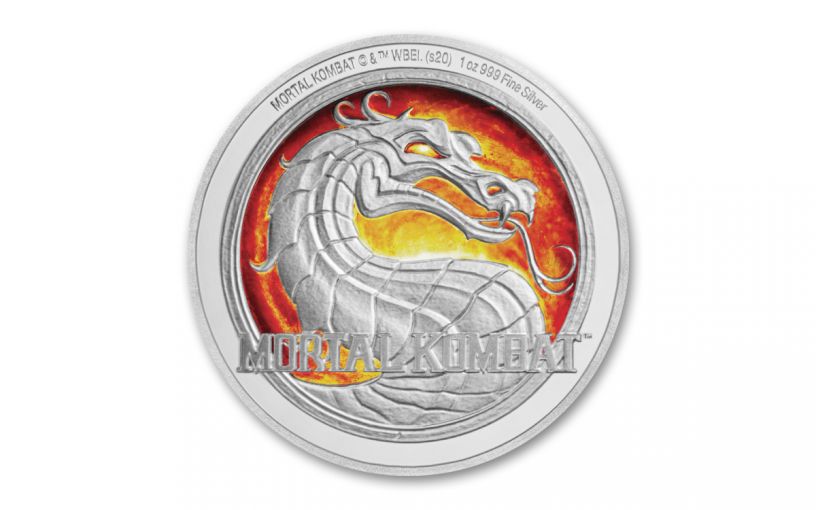 Availability: Out of Stock
This item is currently Out of Stock. Please sign up to be notified if this product becomes available.
Item #
363415
Add to Wish List Add to Wish List Wishlist is for registered customers. Please login or create an account to continue. Add to Compare

Originally developed by Midway Games in 1992, Mortal Kombat was an instant hit that combined all the thrills of a Jean-Claude Van Damme action movie with a storyline rooted in ancient Kung-Fu folklore. Today, the series is the most successful fighting franchise in the history of video games and one of the highest-grossing media franchises of all time. And now it’s also the theme of a new coin series that pays tribute to the massively popular horror-fantasy game.

Struck in one full ounce of highly pure 99.9% fine silver, this legal-tender $2 coin not only features the game’s iconic dragon logo, but it’s augmented by a fiery red-and-yellow colorized background! The design is simply magnificent — all the more so since it was struck in gorgeous proof condition by the New Zealand Mint from hand-selected planchets, polished dies and multiple strikes to produce beautifully frosted details rising over mirror-like fields.

One of the greatest appeals to Mortal Kombat is its roster of colorful characters. They’re a mixed bag of heroic and villainous rogues all bent on winning a no-holds-barred fighting tournament. Each one is equipped with his or her own unique combat skill and equipment. Some of the popular fighters include Kitana, a 10,000-year-old princess and the master of hand-to-hand combat; the Bruce Lee-like Liu Kang who can throw fireballs at his opponents; the scary Shao Kahn, who can absorb the souls of his opponents and is often armed his dreaded Wrath Hammer; Scorpion, a lethal assassin whose malevolent and gory skills include glowing white eyes and the ability to teleport; and the merciless Sub-Zero, whose Spinal Rip Fatality move is one of the most violent and gruesome finishing actions in the entire series.

And speaking of violent, the Mortal Kombat series has gained a reputation for its high levels of violent content, including, most notably, its array of moves that not only allow players to defeat their opponents, but to actually, gulp, “Finish” them. The controversies surrounded this over-the-top animated violence helped inspire the creation of today’s Entertainment Software Rating Board (ESRB) rating system that assigns age and content ratings to video games.

Released on behalf of Niue, a small island nation in the South Pacific Ocean, each coin available in this offer will come in its original government packaging that consists of a specially designed Mortal Kombat-themed box that replicates an arcade cabinet! Just 2,020 of these coins will be released for the entire world. With the huge popularity of the Mortal Kombat series, the time to obtain your 2020 Niue One-Ounce Silver Mortal Kombat Colorized Proof is now!

Drop kick the 2020 Niue One-Ounce Silver Mortal Kombat Colorized Proof into your collection. Get one now for your favorite game player — especially if that player is you!