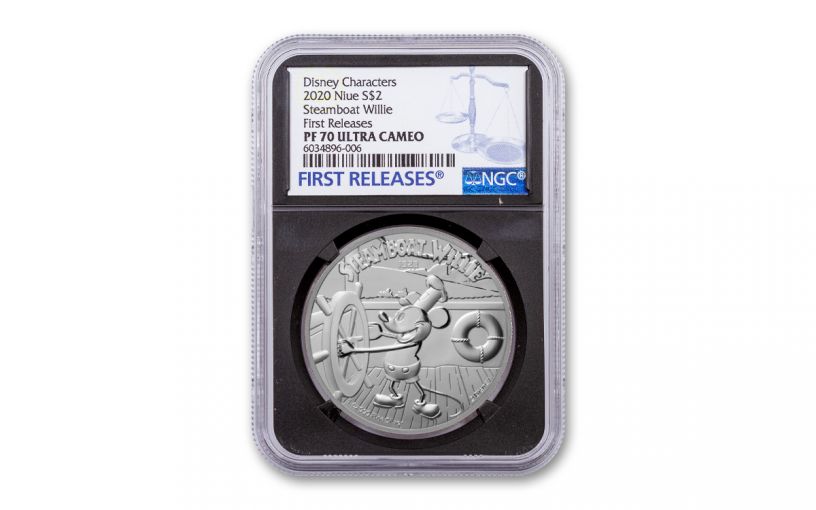 Availability: Out of Stock
This item is currently Out of Stock. Please sign up to be notified if this product becomes available.
Item #
364468
Add to Wish List Add to Wish List Wishlist is for registered customers. Please login or create an account to continue. Add to Compare

The Debut of the Most Famous Mouse in the World — Now in Gleaming Silver!

As the stage lights came down at New York City's Colony Theater on the evening of November 18th, 1928, the audience had only a slight idea of what was in store for them. Two animators, striking out on their own after creating a famous series for Universal Studios, had invested everything they could into one final, unique shot at success. Seven minutes later, the audience was drying their eyes and holding their sides after laughing to the first cartoon with fully synchronized sound. With “Steamboat Willie” Walt Disney and Ub Iwerks introduced the world to Mickey Mouse — and the world wanted more!

Today, “Steamboat Willie” is known as the touchstone for Walt, Mickey, animation, film, modern entertainment . . . the list goes on! It’s recognized as a vital piece of history as part of the National Film Registry and as a monumental work as part of the Museum of Modern Art’s permanent collection. More than 90 years of storytelling and culture can be traced to the first spins of the ship’s wheel and the first whistles of the song “Steamboat Bill!”

Now, you can bring that landmark scene home to your collection because Disney has teamed up with the New Zealand Mint to create a coin for the ages. Struck in a full Troy ounce of highly pure 99.9% silver, it features Mickey at the steamboat’s wheel, ready to whistle a tune and sound the horns — right before Pete, the REAL captain, kicks Mickey off the bridge! It’s a detailed recreation that’s sure to bring a smile to your face.

Officially licensed by Disney, this coin is $2 legal-tender in Niue, a small island nation in the South Pacific Ocean. Plus, it has been graded by the Numismatic Guaranty Corporation (NGC) as being in flawless Proof-70 Ultra Cameo (PF70UC) condition, a distinction that means your perfectly-graded proof will have ZERO imperfections — showing all features and fields exactly as the engraver and mint intended. In addition, NGC has certified that your proof is a First Releases (FR) coin, a designation that means your coin was received by NGC or an NGC-approved depository within the first 30 days of its release. It will also come sonically sealed in an acrylic holder with a unique black display core.

Just 1,928 of these delightful proofs will be released — one each for the year of the cartoon’s historic debut. Disney fans the world over have made quick work of similar coins in the past, and the extremely high quality and purity of these coins are grabbing the attention of audiences of all kinds. Altogether, time is going to be extremely short to make these your own! Don't let this ship pass you by — hoist a few of these into your cart now!

Toon up your collection with these 2020 Niue One-Ounce Silver Disney Mickey Mouse Steamboat Willie Coins in Proof condition. With so few coins available to the time to secure yours is now!