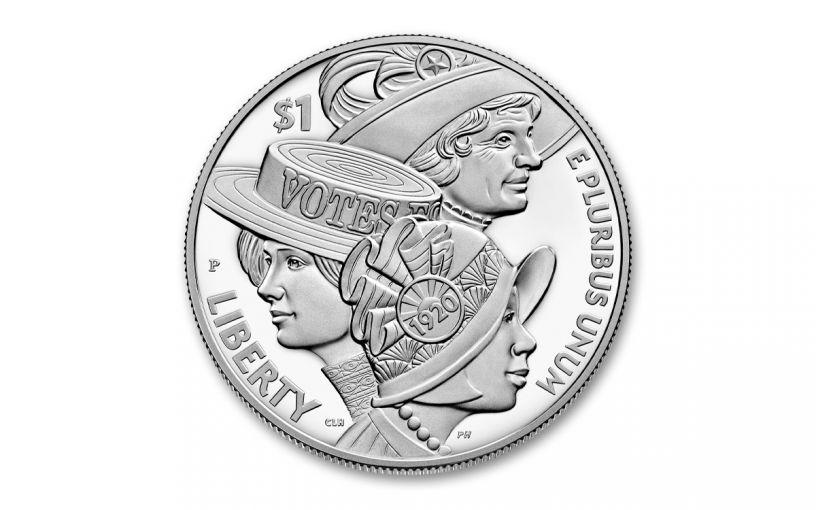 Availability: Out of Stock
This item is currently Out of Stock. Please sign up to be notified if this product becomes available.
Item #
365727
Add to Wish List Add to Wish List Wishlist is for registered customers. Please login or create an account to continue. Add to Compare

For decades, American women were denied the right to vote. Some of the reasons put forth to refuse them this basic right included such shockingly sexist excuses as “a woman’s brain involved emotion rather than intellect” and “the masculine mind was dominated by judgment while the feminine mind was ruled by emotion.” But when the 19th Amendment granting women the right to vote was finally ratified on August 18, 1920 it triumphantly put to rest those painful chauvinistic notions.

To pay tribute to the 100th Anniversary of this historic moment in American history, the United States Mint in 2020 issued a distinctive commemorative silver dollar that honors the long struggle women suffragettes endured to make that moment happen. In addition to commemorating the centennial of the 19th Amendment’s ratification, the coin was released with a goal of increasing public awareness about the women’s suffrage movement.

Struck in 26.73 grams of highly pure 99.9% fine silver, this fabulous coin captures the many decades the suffrage movement spanned with a trio of women, each symbolizing the women from those long-ago eras who fought bravely and tenaciously to make the 19th Amendment a reality. The coin’s reverse shows “2020” being dropped into a ballot box decorated with a button that reads “VOTES FOR WOMEN.” Fittingly, the obverse and reverse designs were created by prominent women artists. They were designed by U.S. Mint Artistic Infusion Program (AIP) artist Christina Hess and sculpted by U.S. Mint Medallic Artist Phebe Hemphill.

Each coin available here was struck at the “Mother Mint” in Philadelphia and comes in gorgeous Proof condition, meaning they were expertly crafted by the mint from hand-selected planchets, polished dies and multiple strikes to produce beautifully frosted details rising over mirror-like fields. Each will also come in its original government packaging that consists of a black presentation case and a mint-issued Certificate of Authenticity.

The passage of the 19th Amendment ended almost a century of protest and lobbying for women to have the right to vote. Cast your ballot for these coins and one — or several — to your cart today!

Pay tribute to the 100th Anniversary of Women’s right to vote with this 2020-P Women’s Suffrage Centennial Silver Dollar Proof. Order yours now!