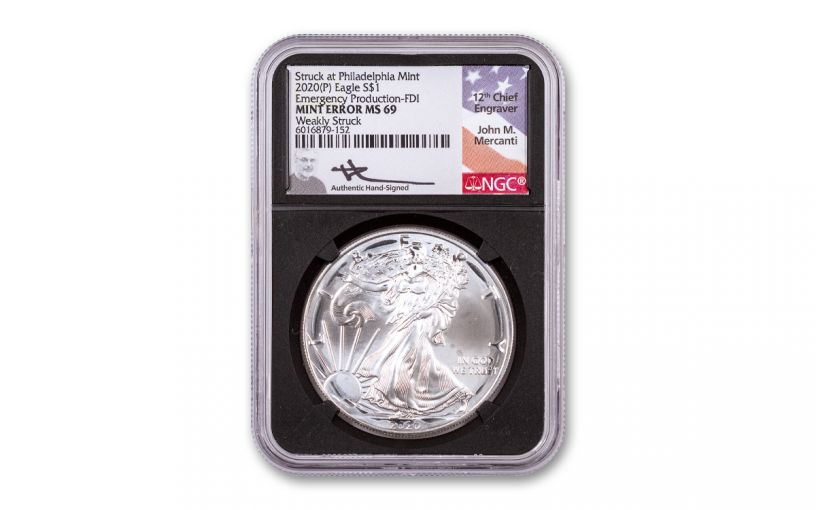 Availability: In Stock
This item will ship within 2 business days.
Item #
363533
CC Payments as low as
$147.50 / month
Add to Wish List Add to Wish List Wishlist is for registered customers. Please login or create an account to continue. Add to Compare
Recommended Products
Product Description

The Philadelphia Mint Comes To The Rescue

Adding to the uniqueness of the coins available here is the fact that they were all certified by NGC as being “Weakly Struck” error varieties. This error is caused by a weak strike during the minting process, either caused by inadequate ram pressure or insufficient die approximation. The weak strike is very noticeable on both the obverse and reverse.

Nearly Flawless Coins From Among The First Issued

In addition, every bullion Silver Eagle available in this offer has been graded by NGC as being in flawless Mint State-69 (MS69) condition, a distinction that means these perfectly-graded coins will have ZERO imperfections — showing all features and fields exactly as the engraver and mint intended. Plus, NGC has certified that these Silver Eagles are First Day of Issue (FDI) coins, a designation that means they were received by NGC or an NGC-approved depository by the release date or on the business day within 24 hours of the official release date. They will also come sonically sealed in an acrylic coin holder with a special black display core.

Signed By A Coin Legend

As a final addition to this amazing opportunity, the labels encapsulated with these Silver Eagles have been personally signed by the legendary John M. Mercanti, the U.S. Mint’s 12th Chief Engraver! A giant in the numismatic world, Mercanti has produced more coin and medal designs than any person in U.S. Mint history — including the Heraldic Eagle design that appears on the reverse of this coin!