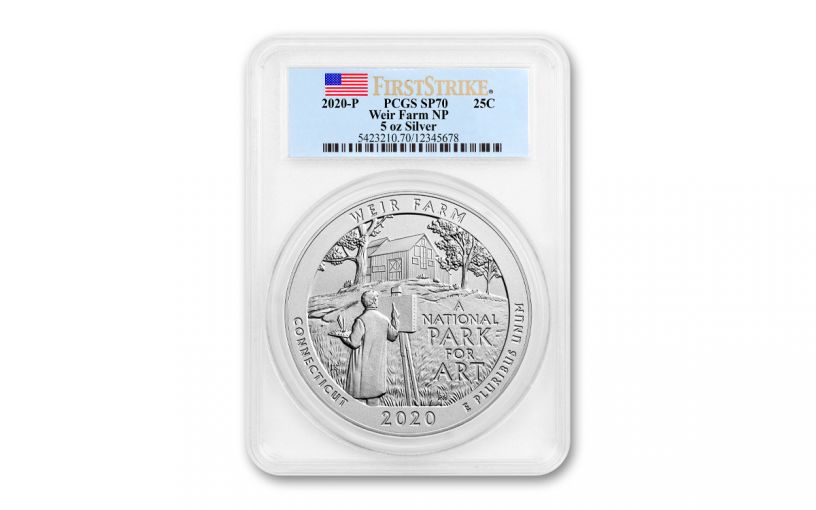 Availability: Out of Stock
This item is currently Out of Stock. Please sign up to be notified if this product becomes available.
Item #
361501
Add to Wish List Add to Wish List Wishlist is for registered customers. Please login or create an account to continue. Add to Compare

The U.S. Mint’s celebrated America the Beautiful Quarters® series continues its epic run in 2020 with the release of the Weir National Historic Site Quarter struck as a gigantic coin in five ounces of highly pure 99.9% silver! Measuring an incredible 76.2 mm in diameter, this coin is nearly twice the size of an American Silver Eagle!

The America the Beautiful series has proven extremely popular since it began back in 2010. For those who have been collecting from the start, each release has provided a new and exciting way to discover and appreciate all that America has to offer. The Weir National Historic Site is a perfect example of a coin that presents collectors with a scene of America’s beauty that would likely be overlooked otherwise. It depicts an artist painting on an easel outside Julian Alden Weir’s studio at Weir Farm located in Ridgefield and Wilton, Connecticut.

Each 2020 Five Ounce Silver Weir National Historic Site coin available in this offer has been graded by the Professional Coin Grading Service (PCGS) as being in stunning Specimen-70 (SP70) condition, a distinction that means your perfectly-graded coin will have ZERO imperfections – showing all features and fields exactly as the engraver and mint intended. Plus, PCGS has certified that these are all First Strikes (FS) coins, a designation that means that they were received by PCGS or a PCGS-approved depository within the first 30 days of their release.

Consisting of more than 60 acres of beautiful woodlands, fields and waterways, Connecticut’s Weir Farm National Historic Site has been described as a national legacy to American Impressionism, the creative spirit, and historic preservation. It’s also the only National Park Service site dedicated to American painting. Established in 1990, the site was part of property originally owned by American artist Julian Alden Weir (1852-1919), who acquired the land for $10 and a painting he had acquired while studying in Europe. Not only is Weir hailed today as the father of American Impressionism for his poetic images, but his generosity toward younger and less fortunate artists won him many admirers around the world.

This Five Ounce Silver Weir National Historic Site release is one of five America the Beautiful Coins that will be struck only in 2020. As such, it will be available for only so long. Secure one for yourself before it’s too late!

A SERIES OF FIRSTS – Each coin in this offer was struck at the Philadelphia Mint in five ounces of highly pure 99.9% fine silver. And, at 3 inches in diameter, they are from the largest quarter coin series ever struck.

GRADED IN PERFECT SPECIMEN CONDITION – Your coin has been graded by the Professional Coin Grading Service (PCGS) as being in stunning Specimen-70 (SP70) condition.